The Ministry of Wildlife and Forest Conservation has issued a warning to local government authorities to dispose of their garbage elsewhere without dumping them in the vicinity or inside forest reserve land.

Ministry of Wildlife and Forest Conservation Secretary M.K.B. Harischandra, speaking to The Morning, said: “The wild animals as well as the vegetation within and in the outskirts of the forest reserves and conservation areas are under grave danger due to the continued disposal of garbage by the municipal and urban councils. We have on several occasions issued them directives to find suitable grounds to dispose of the garbage.” 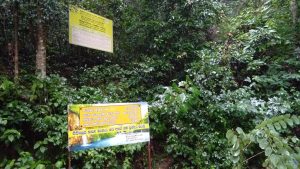 Sri Lanka Scouts Association notice board alerting commuters not to dispose garbage adjacent to the Hinguruwana Forest Reserve in the Harispattuwa Pradeshiya Sabha.

He added that many have wrongfully accused the Department of Wildlife Conservation (DWC) and the Forest Department as well as ministry officials stating that the cultivation lands are being acquired by the respective state institution under the guise of setting up elephant fences.

Harischandra elaborated: “The elephant fences will be set up even outside areas belonging to the Forest Department, to prevent the elephants from wandering off to the villages and cultivation lands. This should not be confused with the perimeter fences that mark the forest lands.”

Meanwhile, the Ministry of Wildlife and Forest Conservation is also looking to take legal action against the local government authorities that continue to dump garbage ignoring the warnings that have been issued.

At least 54 locations were identified by the DWC in recent times where they had observed wildlife to be feeding off the dumpsters. The DWC pointed out that harmful items such as polythene and other material was being ingested by these animals as they consume the disposed food items in these garbage mountains.

June 17, 2020 byTSM Web Desk No Comments
Jeevan Thondaman has been appointed as the General Secretary of CWC.

December 22, 2020 byNethmi Liyanapathirana No Comments
School activities for grades one to five will commence on 11 January 2021 in schools across the island, except for those in the Western Province and isolated areas.