An internal investigation is to be launched on the Board of Investment (BOI) to identify officials, if any, linked to the release of controversial garbage containers imported to the country by a local company.

Development Strategies and International Trade Deputy Minister Nalin Bandara told The Sunday Morning that if such a connection is revealed during the investigations, the officials responsible would be removed from the BOI and stern legal action would be taken against them.

The Deputy Minister also stressed that the question the Government too had at present was how the imported containers, which were supposed to be re-exported to some other countries, entered the country.

The Consumer Protection Unit of Sri Lanka Customs last week seized 65 freight containers containing used mattresses imported from the UK. The Customs Officers’ Union claimed that a consignment of 102 container loads of garbage imported from the UK was at the Colombo Port while another 122 containers of garbage had already been cleared out of the Port to unknown destinations within the country because of a loophole in import regulations created while the previous Government was in power.

The All Ceylon Customs Service Union (ACCSU) claimed that the Gazette Notification No. 1818-30 of 2013 issued by then Finance and Planning Minister and President Mahinda Rajapaksa under the powers vested in him, had paved the way for large-scale imports of foreign garbage to the country.

Union leaders are calling on Finance Minister Mangala Samaraweera to act swiftly and close the regulatory loophole that enables the import of garbage free of any import inspection and controls.

Not a BOI company 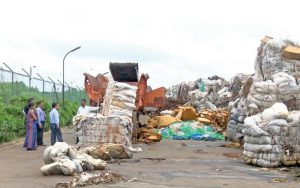 Meanwhile, issuing a media release on Friday, the BOI clarified that the 102 containers of contaminated material had not been imported by a BOI enterprise, as the consignee of the said goods is not a BOI enterprise and wasn’t operating within a BOI zone. These containers are lying in the Port of Colombo.

Furthermore, the BOI stated that on the activities of a BOI enterprise operating under Hub Regulation No. 1 of 2013, namely Hayleys Free Zone Ltd. (HFZL), the BOI permitted the company in May 2014 to operate an integrated logistics centre and entrepot trading as permitted activities within the Katunayake Export Processing Zone.

HFZL had imported 130 containers of used mattresses and carpets from the UK for the purpose of re-export in October 2017. Out of these containers, 29 had been re-exported.

However, in January 2018, according to the BOI, which observed that a significant amount of this cargo was unloaded/stored within the free zone premises without being re-exported as envisaged, the BOI had given written instructions to the company to strictly comply with commitments laid out in the BOI agreement and the applicable environmental regulations. Simultaneously, the BOI had taken further steps to suspend all future imports of used material, and the company committed to clear all cargo by end-February 2018.

The company, however, had failed to meet this commitment and had from time to time requested extensions to comply, citing technical and other constraints. Since the company failed to re-export the goods as committed, the BOI had decided to take stern action against the company with a view to conclude this matter expeditiously, it stated.

However, during inspections carried out by CEA officials, it had been revealed that the garbage dump was located at a private company space within the Katunayake Free Trade Zone and it further uncovered that 130 containers were brought into the country by this private company in 2017 using a gazette issued in 2013. Fifty-seven containers out of these had been re-exported and 72 containers are at Katunayake, according to the CEA.

The question of why the BOI didn’t take legal action against the said company, since the load of containers had been stored within the free zone premises since January 2018, as alleged by the Board, remains unanswered. 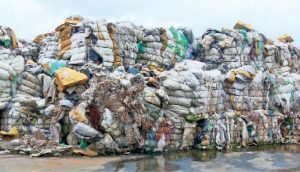 Meanwhile, HFZ, in a press release, stated that the company had no connection to the cargo that was lying at the Port of Colombo, and HFZ is not involved in any way or manner with the said containers presently lying at the Colombo Port. It is neither the importer, consignee, nor logistics services provider in respect of the said containers.

“There has also been adverse media publicity with regard to an earlier shipment, which was also not imported by HFZ. The said shipments were sent to HFZ by the importer for the purposes of processing and re-export. Some such cargo has already been processed and re-exported. All others, once processed, would also be re-exported. The containers received by HFZ did not contain any garbage or other waste material as alleged in several media reports,” it further stated.

Missing without a trace