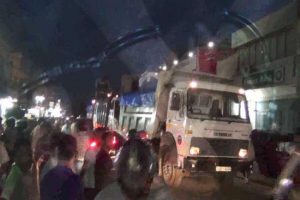 Following the attack on four out of the 28 trucks that were en route to the site from Colombo on Monday (19), where four suspects had been arrested and later released on bail, the Colombo Municipal Council (CMC) had requested the Acting Inspector General of Police (IGP) to provide security detail for the garbage trucks.

“Despite the security detail that was provided during the transport of garbage yesterday (Saturday), the group had once again pelted rocks at the moving trucks and had also damaged the trucks as well as the Police cab which was providing security. Yesterday’s attack had taken place in Theladiya,” CMC Commissioner Palitha Nanayakkara stated.

Police Media Spokesperson SP Ruwan Gunasekara, commenting on the incident, stated: “These attacks have been taking place since garbage was first transported from Colombo to Aruwakkalu.

We arrested a resident of the Theladiya area in accordance with the Offence against Public Property Act under the suspicion of leading the attacks and for damaging public property. He was produced at the Puttalam Magistrate Court and was remanded till 28 August until his next court date.”

May 7, 2019 byEaswaran No Comments
The Constitutional Council (CC) today unanimously approved the appointment of Dappula De Livera PC as the new Attorney General.