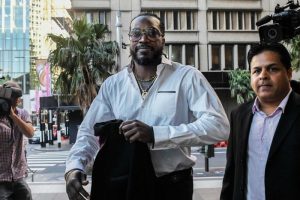 Judge Lucy McCallum, in her verdict last October, said Fairfax had not justified its articles on either the basis of truth or of qualified privilege, which weighs up the public interest value of published information and whether or not the media outlet acted reasonably

Chris Gayle has been awarded AUD300,000 in damages after he won a defamation case against Fairfax Media in October 2017. The West Indies batsman had been the subject of articles claiming he had exposed himself to a massage therapist in Sydney during the 2015 World Cup. He sued the publishing company and the court found in his favour, but Fairfax Media have again said they will appeal the judgment.

The case relates to a January 2016 report in The Sydney Morning Herald, The Age and The Canberra Times. Leanne Russell, a massage therapist who came to assist the West Indies team at Drummoyne Oval, alleged that she entered the dressing room to look for a towel when Gayle dropped his and said “is this what you’re looking for.”

Judge Lucy McCallum, in her verdict last October, said Fairfax had not justified its articles on either the basis of truth or of qualified privilege, which weighs up the public interest value of published information and whether or not the media outlet acted reasonably.

On Monday, after finalising the value for damages, McCallum said the allegations “went to the heart of Mr Gayle’s professional life as a batsman”. The player had given evidence to that end during the trial saying it was “the most hurtful thing I’ve actually come across in my entire life”.

While the judge found those statements “surprisingly compelling” and “a particular source of hurt for Mr Gayle were the fact that there were calls for him to be banned from international cricket”, she agreed with Fairfax’s submission that they were “not at the most serious end of the spectrum.”

A spokesperson for the publishing company reiterated its concerns about the fairness of the trial. “The damages award merely confirms the appalling burden of defamation laws in this country. Fairfax is immediately bringing an appeal.”

During the trial, Fairfax had asked Justice McCallum to order a new trial, concerned that the closing statements of Gayle’s barrister, Bruce McClintock, SC had prejudiced the jury against it. However, she said on Monday that she did “not regard there to have been anything improper in the submissions put by Mr McClintock”.

January 8, 2020 byRevatha No Comments
The International Cricket Council announced on Wednesday the umpire and match referee appointments for the U-19 Cricket World Cup 2020, to be held in South Africa from 17 Jan. to 9 Feb.

Pakistan fight in pursuit of 381

January 14, 2019 byRevatha No Comments
South Africa moved ever closer to a 3-0 clean sweep