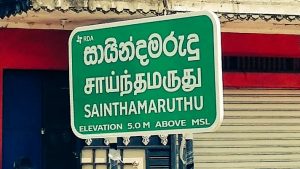 A gazette has been issued to establish an Urban Council in Sainthamaruthu.

Minister of Public Administration, Home Affairs, Provincial Councils &
Local Government, Janaka Bandara Tennakoon, issued the gazette notice by the virtue of the powers vested in him by Section 2, 3 and 9 of the Urban Councils Ordinance (Chapter 255).

Accordingly, the term of office of the  Sainthamaruthu Urban Council will commence on the 20th March 2022.

Prime Minister Mahinda Rajapaksa made a promise to establish an Urban Council in Sainthamaruthu before the presidential election last year.

Independent Presidential Candidate M.L.A.M. Hizbullah had also mentioned this on his election manifesto named “Our Dreams”.

Under the topic administrative unit, Hizbullah had stated that an urban council will be established in the Sainthamaruthu area.

November 16, 2019 byTSM Web Desk No Comments
The Talawakelle Police said the Deputy Mayor of the Thalawakale Lindhula Municipal Council has been arrested for being in possession of 219 sample ballot papers.

June 25, 2019 byEaswaran No Comments
The Janaposha Foundation today announced that it was suspending its free meals project with immediate effect after false allegations had been made recently .