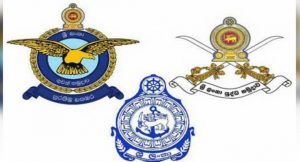 President Maithripala Sirisena has issued a Gazette Extraordinary calling upon the armed forces to maintain public order across the country with effect from yesterday (22).

The President is the Commander-in-chief of the Sri Lanka Armed Forces and has issued the gazette by virtue of the powers vested in him by Section 12 of the Public Security Ordinance (Chapter 40).

Accordingly, the Army, Navy and the Air Force have been called out for the maintenance of public order in the areas specified below:

March 19, 2020 byTSM Web Desk No Comments
The government is to declare a six day period commencing 20 March until 27 March as a 'work from home' period for the public and private sectors, The Sunday Morning learns.

March 7, 2019 byRandev No Comments
Niraj Roshan who was arrested last year over the illegal possession of elephants was released under order from the Special High Court today (07).