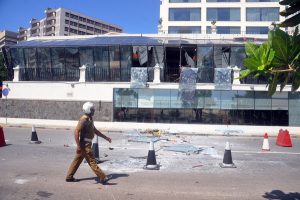 Except for fragments of shattered window glass, roof tiles, and a stopped clock, the edifice of the church and shrine of St. Anthony, Kochchikade is wholly intact and unblemished. But, at the scene of last Sunday’s murderous bombing, a few hours after the attack, I watched the rows of white body bags at the foot of the revered statue of the saint grow as more dead were brought out of the church after medico-forensic examination.

The pattern of building damage was the same when I visited the Shangri-La Hotel, and at the seven other bombing sites too, judging from the numerous visuals in the media.

This clearly shows that the actual size of each bomb was relatively small with a consequently low blast yield. In contrast, the LTTE vehicle bomb that struck the Defence Minister Ranjan Wijeratne’s convoy at Thunmulla Junction, Bambalapitiya was so powerful that the bathroom door in my home at Rajagiriya, about 6 km away, rattled eerily when it exploded. At the attack site itself, the smaller adjacent buildings – like that of the Perera & Sons snack bar – were either flattened or severely wrecked. In this urban guerrilla strike, the target was similarly a human, but perhaps due to the need of penetrating the protective armour plating of the Minister’s car, the explosive was far more powerful.

The suicide bombers who struck last Sunday, however, only needed to be among the people crowded inside the targeted churches and hotels in order to kill the maximum number of people. News commentaries have already pointed out that since the bomber was not allowed entry into the Zion Church in Batticaloa, the death toll in the explosion just outside that church was lower than if it had occurred inside the packed church.

In any case, there is a limit to the quantum of explosives (and shrapnel) that can be carried in a backpack or briefcase by an individual suicide bomber. And that was all that was needed for the intended effect of solely killing humans, especially if the bomber successfully penetrated into the crowd at each site. A pew of a church and the buffet counter of a restaurant are positions that bring people closest in such situations.

The surviving eyewitnesses recall that the bombers positioned themselves near the buffet, further indicating the low yield of the bombs they carried.

Thus, the suicide guerrillas clearly wanted to simply kill as many people as possible with the optimum use of their ordnance.

There was a careful selection of the type of human target – Christian churches and places of Christian festivity (Easter brunches). The targeting of a “genus” of humans, namely Christian, indicates the genocidal intentions of the guerrillas. This is no different from the overtly-genocidal intent of the mass shooter at the mosques in Christchurch, New Zealand, just over a month ago.

The Christchurch mass murderer, however, was quite expressive of his genocidal intention as indicated by his lengthy diatribes against non-European humans in his “war manifesto” put out on the web. He explicitly aimed to physically lower the numbers of humans threatening the current geo-political dominance of Europeans.

Although the Easter bombers have not elaborated their motives in any public communication, the ostensible leader of the team of suicide guerrillas was chillingly explicit in his genocidal intent, judging by what he seems to have said (I rely on translation) in a YouTube webcast months ago. In that webcast speech, Mohamed Zahran Hashim said that there are only three types of humans on Earth: The “believers” (Muslims), the peoples subjugated by the believers, and thirdly, the rest of humanity who are to be killed.

Both the Christchurch killer and the Easter killers echo the expressed arguments of Adolf Hitler in his rationale for the mass killing of selected groups (“genus”) of people. In Hitler’s case, he named the Jews and other unwanted groups like the Romany (Gypsies) and physically-disabled and mentally ill people as groups that are “non-essential” to civilisation and suitable for elimination. Hence the mass-scale death factories in Dachau, Auschwitz, and other places operated by the Nazi units.

However, the deaths of civilians during situations of battle – whether guerrilla or conventional warfare – are not the result of deliberate genocidal intent.

Increasingly, however, Hitler is being left behind as an explicit, public advocate of genocide. Nowadays, with all the power of the internet and social media platforms, numerous sundry genocidal activists are announcing their intentions to the world even as they prepare for or actually carry out their gory intentions.

The Easter Sunday massacre in this country then seems to have been a revenge massacre in response to the massacre of Muslims in a Christchurch mosque last month. Hence, the objective of the Easter attackers does not seem to have anything to do with Sri Lankan politics of ethnicity. Rather, these suicide guerrillas seem to have merely used this country and its yet-fragile post-war society as a battleground for their genocidal geopolitics.

Their action is dramatically similar to the action of the Australian mass shooter who went to New Zealand in order to carry out his genocidal project against Muslims. As his webcast “manifesto” indicates, the Christchurch shooter openly hopes that his massacre will contribute to more similarly genocidal massacres.

Rather, as readers will acknowledge, there are several Sinhalese Buddhist organisations – some of them very prominently led by Buddhist monks – that have been linked to the harassment and violence against Sri Lankan Muslims. Indeed, the ethnic conflict overall is primarily a contestation between the State-monopolising Sinhala-Buddhist majority on the one side and the ethnic and religious minorities on the other (comprising the Tamils and Muslims).

Propaganda and other political pressures against Muslims by these Sinhalese-Buddhist groups continue even today, often with thinly veiled threats of further violence.

Instead, the Easter bombers targeted Christians on a major Christian festival.

Does not this mirror the ideology of Mohamed Zahran Hashim and sundry-related Islamist fundamentalist movements like Daesh? Is this not the same kind of ideological fundamentalism as Hitler’s Nazism?
The unambiguous collective reaction by all Muslim community bodies in categorically rejecting and condemning the genocidal rationale of the Easter bombers also indicates the distance between Muslims in this country and the actions of the Easter bombers.

How much the parallel fundamentalists on the Sinhala-Buddhist side will pick up the Easter bombings as a reason for further onslaught against the Muslim community remains to be seen. Judging by the propaganda of such Sinhala-Buddhist supremacist groups, it certainly will not depend on their intellectual reasoning.

More importantly, the way the country’s combined political leaderships handle this latest act on the stage of ethnic conflict will decide our collective future.