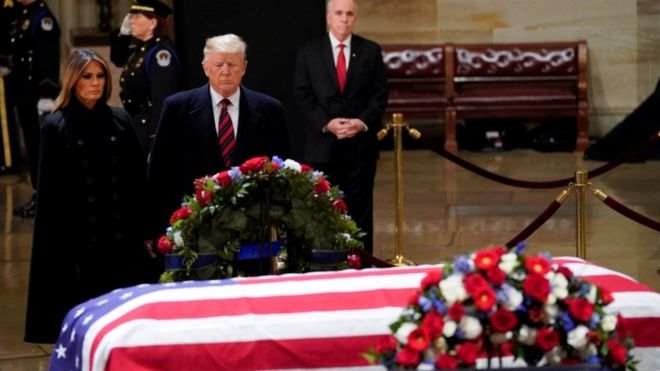 US President Donald Trump and his wife Melania have paid their respects to President George HW Bush as he lies in state at the US Capitol.

Trump made a brief visit to the rotunda, where the public can visit the coffin until the funeral on Wednesday.

Trump has in the past clashed with the Bush family but will attend the funeral service.

Bush, who died on Friday aged 94, will later be buried at his Texas home alongside his wife, Barbara.

His coffin had earlier left Texas to a 21-gun salute and was carried to Washington on board Air Force One – temporarily renamed Special Air Mission 41 in homage to the late president.

Bush, who served as the 41st US president between 1989 and 1993, had been receiving treatment for a form of Parkinson’s disease and had been admitted to hospital with a blood infection in April.

Three hours after an assemblage of officials, dignitaries, family and friends welcomed the coffin of President George HW Bush to the US Capitol, the current president and first lady made a mid-evening visit to pay their respects.

The motorcade took only a few minutes to travel down Pennsylvania Avenue from the White House. At 20:30 (01:30 GMT on Tuesday) Donald and Melania Trump arrived inside what was now a relatively empty Capitol rotunda. Members of the five branches of the US military continued to stand to attention, as the two approached the flag-draped coffin.

The president gave an extended salute and the first lady put her hand over her heart. The only sound in the massive, marbled room – where 32 people, including 12 presidents, have lain in state – was the steady whirr of press cameras.

Mr and Mrs Trump then turned and left. In all, the president was away from the White House less than half an hour, without a word to the public or press.

The public will be able to pay respects at the rotunda until Wednesday’s invitation-only funeral service at the National Cathedral.

Trump will attend with Melania but will not deliver a speech.

According to Mark Updegrove’s book The Last Republicans, which came out last year, Bush voted for Trump’s opponent Hillary Clinton in the election and had called Trump a “blowhard”.

His son, former President George W Bush, worried he would be the “last Republican president”, despite Trump running on the party’s ticket, the book said.

A service was held in the rotunda after Bush’s coffin arrived on Monday afternoon, with members of the military serving as pallbearers. George Bush Jr. was in attendance and was clearly moved by the events.

In a eulogy, House Speaker Paul Ryan said: “Here lies a great man”, adding that “no-one better harmonised the joy of life and the duty of life”.

Ryan said Bush was a “great leader and a good man, a gentle soul of firm resolve”.

Vice-President Mike Pence said there was a “kindness about the man that was evident to everyone who met him”.

George HW Bush was a decorated fighter pilot in World War Two, a head of the CIA and vice-president to Ronald Reagan before being elected president in 1988.

Bush’s spokesman, Jim McGrath, tweeted a picture of Sully with the casket, with the caption: “Mission complete.” (BBC)

May 16, 2019 byRandev No Comments
President Donald Trump has declared a national emergency to protect US computer networks from "foreign adversaries".