Pilapitiya’s writ application fixed for consideration on 4 May 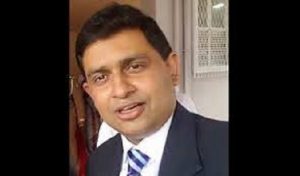 The writ application filed by the interdicted High Court Judge Gihan Pilapitiya has been fixed for consideration on 4th May.

The date was fixed when the writ application was taken up before the Appeals Court.

Pilapitiya’s lawyer has requested the judge bench to extend the ruling previously delivered preventing the arrest of his client without a court order, until the next hearing.

The Appeal court in Feb had issued an order preventing the arrest of Judge Pilapitiya without a Magistrate’s Court order.

Following the order, the Nugegoda Magistrate’s Court had issued summons to Pilapitiya to appear before court on the 2nd April.

However, today,  the judge bench ruled that the previously issued court order will be in effect until the next hearing.

The Nugegoda Magistrate’s Court has issued notices to interdicted Judge Gihan Pilapitiya to appear before court on the 2nd of April.

However, the judge bench ruled that the previously issued court order will be in effect until the next hearing.

Pilapitiya was interdicted on January 22 over the controversial phone conversation he had with UNP MP Ranjan Ramanayake.

The Attorney General (AG) Dappula de Livera had instructed the Police to obtain a warrant and arrest interdicted Judge Pilapitiya and produce him before court on charges of conspiring to fabricate false evidence along with MP Ranjan Ramanayake.