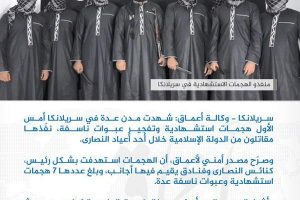 Churches, mosques, and diplomatic missions in several countries have been placed on alert following the Easter Sunday attacks in Sri Lanka, The Sunday Morning learnt.

Diplomatic sources said that security had been tightened at strategic locations, particularly in the US, India, and some EU countries, following the deadly suicide attacks linked to the Islamic State terror network.

India is on heightened alert over fears that Pakistan-linked IS militants may look to strike in India next, sources said.

Indian intelligence had warned Sri Lanka of a possible threat to the country prior to the Easter Sunday attacks, but the warning was not taken seriously.


The Sunday Morning reported recently that India was on alert over the possibility of extremist groups using Sri Lanka to infiltrate India and launch attacks.

Indian diplomats had told The Sunday Morning, just weeks prior to the Easter Sunday attacks, that India had raised concerns over some extremist groups operating in the East.

“There have been reports of some extremist groups operating in Sri Lanka and we are monitoring those reports,” an Indian diplomat said on the condition of anonymity as the issue was very sensitive.

Indian diplomats now state that intelligence information had been shared with their Sri Lankan counterparts about the extremist groups, but little action seemed to have been taken.

India was concerned that some groups that follow the ideology of extremists, based in Pakistan or outside, may use Sri Lanka to launch attacks in India as India can easily be accessed from Sri Lanka using the sea route.

In the past, there had been reports of some extremist groups training in parts of the East to carry out terror-related activities in India.

Following the Easter Sunday attacks, security has been beefed up in countries like India, especially Tamil Nadu, and even in Malaysia where there is a strong Muslim presence.

Malaysian Police stepped up security, particularly at places of worship.
Security has also been tightened at Sri Lankan missions in some foreign countries, particularly Muslim ones.

The Easter Sunday attacks also saw US authorities increasing their own security fearing an attack.

The attacks in Colombo took an international dimension as the bombings at three hotels saw at least 40 foreigners being killed.

Additionally, 14 foreign nationals are unaccounted for at present, and could be among the unidentified victims at the Colombo Judicial Medical Officer’s mortuary.

The US, which lost at least two of its citizens, is assisting the investigations through the Federal Bureau of Investigation (FBI) and the US Indo-Pacific Command (USINDOPACOM).

A US Embassy official said that the FBI and USINDOPACOM are working closely with the Sri Lankan authorities and offering their expertise and other assistance to crackdown on the terror network.

The US official said that there are fears that several members of the group are still active in Sri Lanka following the Easter Sunday attacks, so the US is assisting Sri Lanka to identify the suspects for arrests to be made.

Meanwhile, the Japanese media reported that Japanese Police were also involved in investigating the attacks.

Noting that Japan will be the venue for a number of major events over the coming 18 months, Yamamoto said: “I will instruct police to take all possible counter-terrorism measures.”

Japan will host the Group of 20 (G20) Summit in Osaka in late June, and will also host the Rugby World Cup in the fall and the Olympic and Paralympic Games next year.

Islamic State (IS), which claimed responsibility over the attacks in Sri Lanka, went beyond its usual targets by attacking Sri Lanka through its local followers.

A communiqué, released shortly after an initial report of responsibility by the ISIS news agency Amaq, identified seven attackers and the locations each struck; churches, hotels, and housing in Batticaloa, Colombo, Dematagoda, and Negombo.

ISIS had said that Christians were the intended target of the attack as they are supposedly at war with Abu Bakr al-Baghdadi’s enterprise.

The SITE Intelligence Group said that the attacks – and ISIS’ response – provide a troubling demonstration of how ISIS’ global network is adapting to its losses in Iraq and Syria, how its media machine thrives amid those setbacks, and how the group is willing to adjust its own playbook to justify an attack.

SITE Intelligence Group Director Rita Katz said that in the wake of the Sri Lanka attack, it was all the more critical to confront the fact that ISIS remained a dire global threat.

She noted that in the past couple of weeks, the group had claimed responsibility for attacks in 15 countries, thus marking Sri Lanka another tentacle in its global network.

The text contained in the written document by ISIS claiming it was involved in the attacks was also released in Tamil. Katz said it was not surprising, given that Tamil is among the languages the ISIS media is translated to.

June 28, 2020 bySarah Hannan No Comments
A few prominent and well-seasoned former parliamentarians will yet again be contesting this election from the three districts.