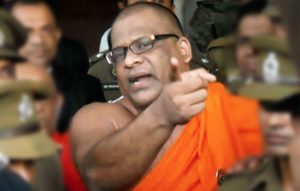 Ven. Galagoda Atte Gnanasara Thera and 3 others have been ordered to appear before the Court of Appeal on 8 November over a case of Contempt of Court.

On 23 September , Mullaitivu Chief Magistrate Leninkumar ordered the final rites of the Chief Prelate of the Nayaru Gurukanda Rajamaha Viharaya on the Nayaru beach near an old Army Camp.

This was considering a complaint filed by the Tamil residents in the area and the Mullaitivu Nirvariya Pillaiyar Kovil Governing Council objecting to the cremation of the Chief Prelate within the temple where a Hindu Kovil was also situated.

However, the body of the Chief Prelate was cremated within the temple premises despite the court order.

Gnanasara Thera stated that they did not agree to the court order and the final rites of the Chief Prelate were done according to the decision of the Sangha Council representing the deceased Prelate.

Subsequently, the lawyers in the Northern Province launched a strike action demanding the arrest of  Gnanasara Thera and other persons who had gone against the court order.

March 25, 2020 byTSM Web Desk No Comments
The White House and Senate leaders of both parties have struck an agreement on a sweeping $2 trillion measure to aid workers, businesses and a healthcare system strained by the rapidly spreading coron