Gopal Bagley to be appointed Indian HC to Sri Lanka 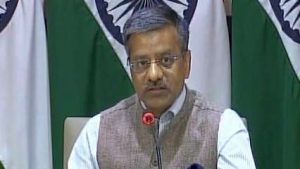 Gopal Bagley is to be appointed as Indian High Commissioner to Sri Lanka.

Bagley currently serves as the joint secretary to the Prime Minister’s Office (PMO).

He has previously served as the Spokesperson of Ministry of External Affairs, India.

Meanwhile, Current Indian High Commissioner to Sri Lanka, Taranjit Singh Sandhu is tipped to be appointed the next Ambassador to United States.

Sandhu is a career Foreign Service Officer. If appointed, he would be replacing Ambassador Harsh V. Shringla, who recently left for India to take over as Foreign Secretary.

August 14, 2018 byMalik No Comments
MEPA will hand over a written complaint to the Indian High Commission in Colombo, seeking the intervention of the Indian Central Government to stop human-induced coastal waste flows to Sri Lanka.