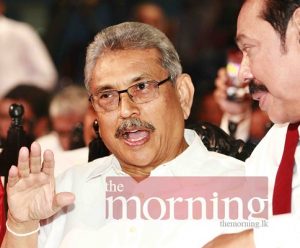 He is set to return to Sri Lanka on the 12th of October.

The Special High Court on 3 Oct lifted the travel ban on the former Defense Secretary and released his passport allowing him to travel to Singapore from 9 to 12 Oct for medical treatment.

Rajapaksa on 1 October filed a motion with the Permanent High Court Trial-at-Bar seeking permission to travel to Singapore for medical treatment from 09 to 12 October.

Rajapakse further requested the court to lift his overseas travel ban and release his impounded passports.

Counsel for Rajapaksa requested the court to release the passport as it is a necessary document to prove Sri Lankan Citizenship on nomination day for the forthcoming Presidential Election.

An overseas travel ban was imposed on the former Defense Secretary over a case filed regarding the misappropriation of Rs. 33.9 million for the construction of the D.A. Rajapaksa Memorial and Museum.

July 18, 2019 byRandev No Comments
National Police Commission Secretary, Saman Dissanayake has been arrested a short while ago (18) by the Criminal Investigations Department (CID).