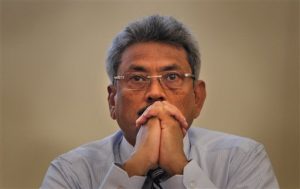 The Supreme Court has issued an order preventing former Defense Secretary Gotabaya Rajapaksa from being tried at the Special High Court till 1 October over the case of misusing state funds in the construction of D.A Rajapaksa Memorial.

After being permitted to travel overseas for medical treatment by the Permanent High Court, the former Defense Secretary arrived in Sri Lanka on Tuesday (23 July).

The duration for his overseas medical treatment was extended on 19 June by the Special High Court judge bench in order for Rajapaksa to be present for a fair hearing of the case.

However, the Supreme Court today (25) issued an order to the Special High Court to postpone the trial of the former Defense Secretary till 1 October.

The case against Gotabaya Rajapaksa was filed by the Attorney General alleging that the former Defence Secretary and six others misappropriated state funds accumulating to Rs 33.9 million during the construction of D.A. Rajapaksa Museum at Medamulana area in Hambantota.

WHO continues evaluations on airborne transmission of SARS-COV-2

July 14, 2020 bySarah Hannan No Comments
At this point the biggest concern is the ability of the virus to transmit through air which is referred to as airborne transmission.