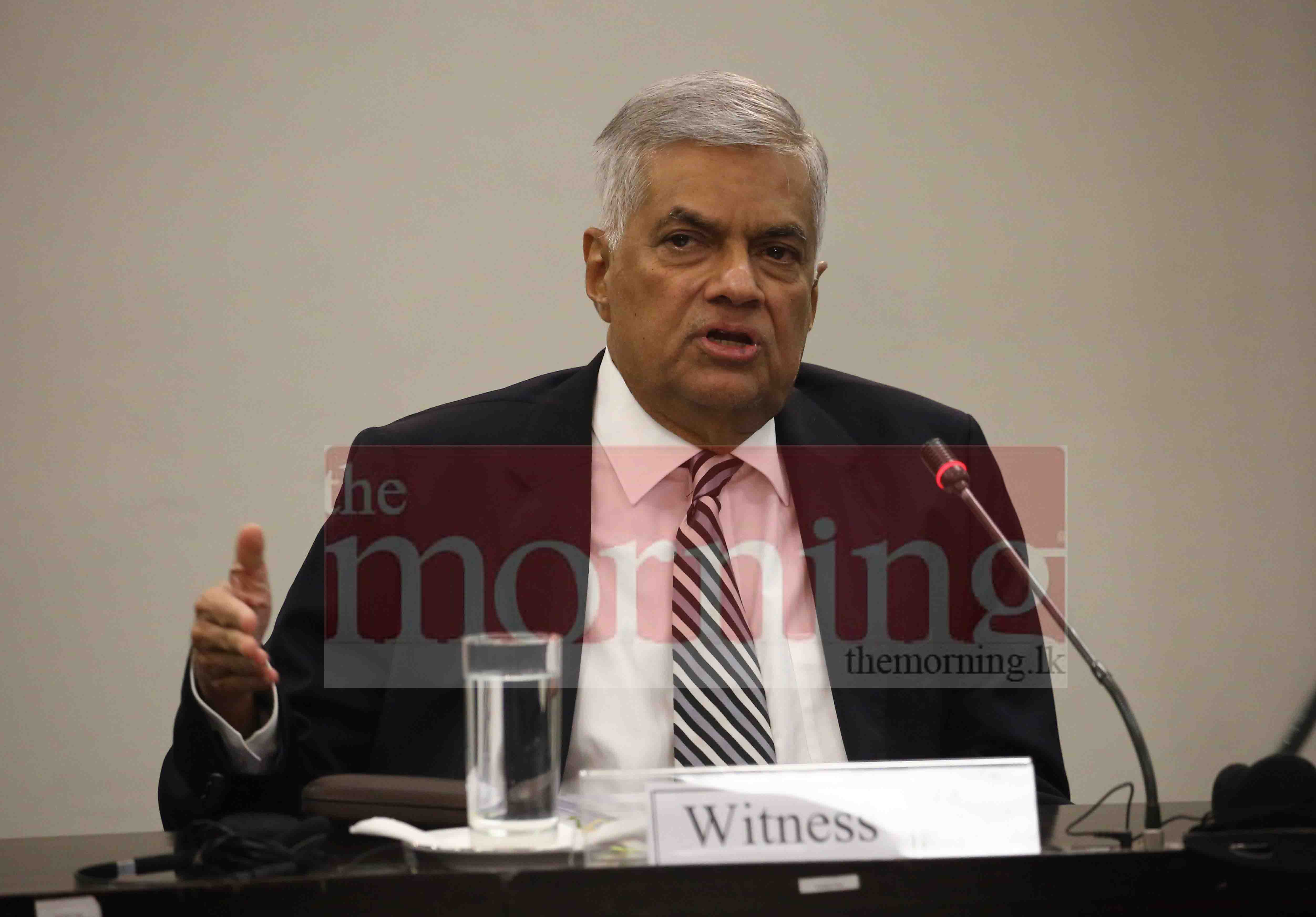 Prime Minister Ranil Wickremesinghe, testifying before the Parliamentary Select Committee probing the Easter Sunday attacks, said that the entire Government and the Cabinet of Ministers were to blame for lapses and shortcomings that allowed the terror attacks to occur.

“Certainly there had been a lapse. There had been shortcomings. We are now in transitional period and we intend to find measures to prevent such lapses from recurring,” the Premier said.

He said that the issue of Islamic extremism had been raised at the National Security Council meetings.

“The issue had been raised several times at the NSC. I received couple of reports from the Minister of Law and Order. Those reports had been sent by the intelligence units. The reports were of the ISIS sympathizers as well religious clashes between two groups. We had also been informed of a Sri Lankan who died in Syria while fighting for ISIS.”

The Premier replied that he had received information from the Ministry of Law and Order.

“I got information from the Law and Order Ministers. Such intelligence is also submitted to the National Security Council but could take a couple of more weeks. So I used to get them from my ministers,” the Prime Minister said.

He then said that he had not been invited to the NSC meeting since the Constitutional Crisis in the latter part of 2018.

Minister Karunanayake: When was the last time you attended the NSC?

PM: I attended the NSC in October 2018. Thereafter I was not invited. Later I found that the IGP too had not been invited. There was a government change in November last year. After I was sworn in again in December, I was informed that a last NSC meeting took place in February 2019. I was told that the NSC was all but disbanded and that the President would meet with the intelligence official when he needed to.

Thereafter, during MP Sumanthiran’s questioning, Prime Minister Wickremesinghe admitted that the Government and Cabinet must bear responsibility for the failing to prevent the attacks.

MA Sumanthiran: Whose duty is to summon the NSC?

PM: The general practice followed was for the President’s office to summon the meeting.

MA Sumanthiran: When did you come to know of the NSC in February?

PM: After the meeting had been held.

MA Sumanthiran: did you inquire why you had not been invited for that meeting?

PM: yes. In fact I asked from the IGP and came to know that he too had not been invited

MA Sumanthiran: did you not ask the president why you were not invited?

PM: I asked him why the Law and Order under ministry was taken over by him and pointed out that it would be best if there was a separate Minister for that portfolio. He said he wanted to conclude investigations into the conspiracy to assassinate him before relinquishing the Law and Order portfolio.

MA Sumanthiran: Do you think that was suitable?

PM: That investigation had started by then.

MA Sumanthiran: Who do you think, as the Prime Minister, is responsible for this?

PM: I say that as a government and the Cabinet we cannot escape from the responsibility. That is why this PSC is meeting to find what went wrong.

Siththam 2019: Bringing art to life in partnership with Astra

August 9, 2020 byNaveed Rozais No Comments
On a recent visit to northern Sri Lanka, The Sunday Morning Brunch met with Jaffna-born and based creative Thulasi Muttulingam to gain insight into Jaffna’s creative and artistic culture