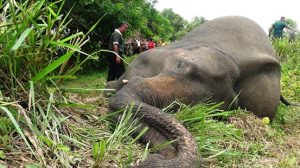 Minister of Environment and Wildlife Resources S.M. Chandrasena today said that the Government Analyst’s Department is yet to submit reports on the remains of the seven elephants found dead in the Digampathana, Thumbikulama forest reserve in Habarana last year.

Chandrasena further noted that a case has been filed at the Kekirawa Magistrate’s Court over the 7 elephant deaths case.

According to Chandrasena the Kekirawa Magistrate’s Court has called for reports from the Government Analyst’s Department, Veterinary Faculty of the University of Peradeniya and the Veterinary Research Institute Gannoruwa.

Chandrasena said the Department of Wildlife Conservation has submitted additional information to court.

According to Chandrasena no suspects have been arrested up to date and added that the case will be taken up on the 17 of March this year.

Following the incident the remains of the animals were referred to the Veterinary Faculty of the University of Peradeniya and the Veterinary Research Institute for further investigations into the cause of the deaths.

May 1, 2019 byEaswaran No Comments
The British Government has consistently made clear its unreserved determination to fight the scourge of terrorism on the United Kingdom’s own soil, and to help others to fight it on theirs, the Britis