The Government has confirmed that US Secretary of State Mike Pompeo would be making a brief visit to Sri Lanka, following an official and lengthier visit to New Delhi, India. 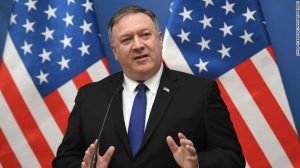 US Secretary of State – Mike Pompeo

“He will be coming to Delhi and then to Colombo. It will be a short visit of a few hours,” Minister of Foreign Affairs Dinesh Gunawardena told The Sunday Morning on Friday (16).

He added that Pompeo would be meeting President Gotabaya Rajapaksa.

“He will meet with President (Gotabaya) Rajapaksa, Prime Minister (Mahinda) Rajapaksa, and officials of the Ministry of Foreign Affairs,” Minister Gunawardena said.

When asked whether the Millennium Challenge Corporation (MCC) Compact would be discussed, Gunawardena said that it was a friendly visit and many topics could be touched on.

“We don’t know yet but obviously they will raise matters important to them. What matters to us, we will have to express. But it is a very friendly visit,” he said.

Meanwhile, Government Spokesman and Minister of Mass Media Keheliya Rambukwella said that it was possible that new proposals could be made during the visit.

“Anyway, they might come out with certain other proposals and they will be accepted or rejected.”

While Pompeo’s visit to India is to conclude on 27 October, his arrival to Sri Lanka is yet officially unconfirmed, according to the US Embassy.

September 27, 2020 bythemorningeditor1 liberty No Comments
Concerns have been raised over the importation of a low-quality boiler from Italy by the previous Government, which spent Rs. 440 million to replace one of four boilers of the 51-year-old Sapugaskanda

October 9, 2020 byCharindra No Comments
A 36-year-old man living in the Ambakandawila area in Chilaw who had visited the Colombo Book Fair last month has tested positive for COVID-19.