Govt. to purchase harvests based on scientific method 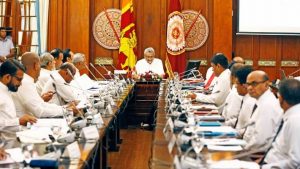 President Gotabaya Rajapaksa has instructed officials to follow a scientific method to purchase harvests from next season.

The President gave these instructions at the Cost of Living-Cabinet Sub Committee meeting held yesterday(24).

According to the President many issues relating to the process of paddy purchasing could be resolved through such method.

Attention was also drawn toward expanding the rice storage facilities across the country.

During this meeting, special attention was drawn to provide essential food items for the public during the upcoming festive season at concessionary rate and ensuring that there is no any shortage.

President Rajapaksa also inquired about how the public will receive the benefit of  rice prices controlled by the government.

The Consumer Affairs Authority revealed that selling rice at prices higher than the Maximum Retail Price is gradually decreasing and the raids on rice traders selling rice at higher prices have been broadened. Also, swift actions have been taken to apprise the traders in this regard.

An assessment was held regarding the steps taken by the government to control the wheat flour price as well as regarding the tax reliefs given for the other essential food items.

Moves to bring back ‘Makandure Madush’ to Sri Lanka

February 6, 2019 byRandev No Comments
Steps are being taken to repatriate underworld leader ‘Makandure Madush’ to Sri Lanka from Dubai.

11 JMI members handed over to TID