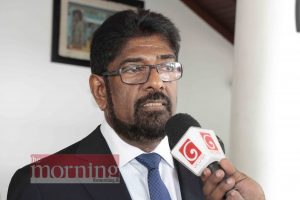 The Government today(9) said that the Chief Justice should launch an investigation into leaked audio clips involving High Court Judges.

Government Spokesperson Minister Keheliya Rambukwella made these comments during the cabinet press briefing in Colombo today.

He said many of the recordings clearly show that the Justice system was compromised in the past years.

“The Chief Justice as the head of the Judicial Services Commission should launch an impartial  investigation into these recordings and restore hope in the Judiciary,” Rambukwella added.

June 5, 2020 byTSM Web Desk No Comments
The Presidential Secretariat has issued revised instructions on the PCR testing and quarantine procedures for the members of the Diplomatic corps based/attached in Colombo when they enter/re-enter Sri

September 7, 2020 bythemorningeditor1 liberty No Comments
The full impact of the MT New Diamond crude oil tanker fire is yet to be assessed, as all hands were on deck to douse the fire that was erupting from time to time since 3 September.