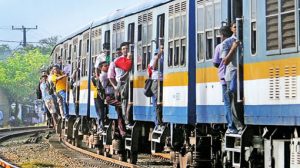 The Government yesterday warned railway unions that it would not hesitate to declare train services an essential service under the emergency regulations if the railway strike continued.

The strike came to an end last night but unions later said they would strike every Thursday until their demands were met.

State Minister of Transport and Civil Aviation Ashok Abeysinghe told The Sunday Morning that the Government was prepared to declare the train service as an essential service if there was such a requirement.

“It will take at least a month to grant their demands and knowing that fact, they are still trying to put the Government in trouble,” he added.

Thousands of commuters were stranded on Friday and yesterday as a result of the train strike.

The strike had been launched after talks to resolve salary anomalies had failed.

December 27, 2019 byTSM Web Desk No Comments
The two individuals who made controversial statements during the 'white van' press briefing have been remanded until the 6th of January.

Sri Lankans must act together in favour of sustained democracy, says UN expert

July 26, 2019 byEaswaran No Comments
The people of Sri Lanka must act together to secure democracy, human rights and the rule of law, says the UN Special Rapporteur on the rights to freedom of peaceful assembly and of association, Cléme