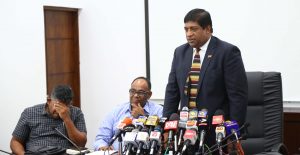 The much anticipated Kerawalapitiya liquid natural gas (LNG) power plant is expected to get the green light this week, despite objections raised by certain parties, The Sunday Morning learnt.

The sharp rise in consumption is the biggest concern in the energy sector as the number of consumers has increased during the past decade. However, despite this, the country failed to develop any major electricity-generating power plants since 2014.

Experts warned that the country would not be able to face the ever-increasing electricity demand in the near future.

The LNG power plant was expected to be implemented this year, but faced a delay of three years as international tenders for the 300MW LNG power plant in Kerawalapitiya were called in November, 2016.

This was called on a Build, Own, Operate, and Transfer (BOOT) basis for a 20-year period as part of the solution to the looming power crisis said to hit by 2020.

As gathered through reliable sources, the tender board appointed was subject to heavy pressure from various parties, including politicians and three former chairmen, which caused them to resign.

The struggle between the Technical Evaluation Committee (TEC), comprising Ceylon Electricity Board (CEB) engineers, and the Standing Cabinet Appointed Procurement Committee (SCAPC), comprising government officials including the Secretary to the Ministry of Power and Renewable Energy, caused delays in the implementation of the LNG project, which later ended up in court.

National Movement for Consumer Rights (NMCR) President Ranjith Vithanage filed a fundamental rights petition in the Supreme Court seeking an Interim Order directing the respondents to halt any further proceedings with respect to the tender for the construction of the 300MW HFO/NG power plant at Kerawalapitiya.

Speaking to The Sunday Morning, Vithanage stressed that he decided to do so after taking into account the impending energy crisis in the country, in order to avert further delays in construction, in hopes to ultimately avoid any emergency power purchases in the future.

“I feel the situation surrounding this issue is better now, compared to seven months ago, when I submitted the petition.

“As the delay was due to my petition, I decided to withdraw it and let the Government to take necessary action as they saw fit,” he noted.

Power and Energy Minister Ravi Karunanayake also told the media last week that he submitted a cabinet proposal seeking a decision on the Kerawalapitiya power plant, but refused to reveal the contents of the proposal.

Highlighting the importance of competitive bidding, the Ceylon Electricity Board Engineers’ Union (CEBEU) stated that the delay of implementing the LNG power plant was completely due to the corrupt nature of the bidding process.

“There are two tenders. One is from the TEC and the other one is for the evaluation of the financial aspects, by the SCAPC. Initially, there were eight bidders, but the TEC recommended six bidders, out of which a Korean bidder was rejected as they failed to submit a financial bid – one of the two

requirements in the bidding process.

“The remaining five were narrowed down to the two lowest.

“There was an issue pertaining to the tax concessions given by the Government where parties claimed that even though the LTL bid was low, they pushed for concessions, causing the issue to drag through several meetings.

“During that process, due to increased pressure from outsiders and politicians, three tender board chairmen resigned,” he concluded.

Claiming that there was massive pressure against the competitive bidding process, the Union stated that the Cabinet was not empowered to make a decision, and that instead the decision should solely depend on the outcome from the tender process.

In the meantime, Lakdhanavi Ltd., a local power company, objected to fresh moves by the Ministry to award the contract to a Chinese company for the execution of the 300MW LNG power plant in Kerawalapitiya despite it being a higher bidder.

It stated that the country would have lost Rs. 50 billion if the contract was awarded to the higher bidder in June, 2018.

Earlier, the company objected to the same decision taken by the previous Cabinet that was in operation prior to the political crisis that started on 26 October, 2018. The company said the same attempt was revived after the appointment of the new Cabinet.

Lakdhanavi Ltd. reportedly wrote to Power and Energy Minister Ravi Karunanayake in this regard. They explained to him that the TEC and SCAPC recommended the project be awarded to them, as they were the lowest bidder.

The company stated, in a letter to the media on Wednesday (5), that the country would lose Rs. 90 billion if the contract was awarded to the higher bidder in the present environment, as the value of the rupee further depreciated to Rs. 180.

Referring to a move to award another project to Lakdhanavi Ltd. instead, the company said that it wouldn’t accept it outside of due procedure.

The tariff of the Chinese consortium, at today’s exchange rate, will be close to Rs. 17 while Lakdhanavi’s will be Rs. 15.50.

The corrupt nature of the awarding of tenders was revealed through the tender process of the Kerawalapitiya power plant and the CEB Engineers Union (CEBEU) has blamed the Ministry.

Power and Renewable Energy Minister Ravi Karunanayake said the CEB was providing uninterrupted electricity to its consumers at a huge loss as the production cost of a unit was Rs. 22.33 while the selling price was only Rs. 16.75.

The plan of the CEB engineers, approved by the PUCSL, stated that equal contribution should be given from coal, LNG, and renewable energy sources. However, renewable energy costs much more than coal, hydro, or other sources, with the unit price at Rs. 30-40.

However, he noted that there was one advantage to local renewable energy generation in Sri Lanka as the country could save money spent on fuel or coal.

He also noted that his Ministry would implement a least-cost generation plan and would protect consumers while providing uninterrupted electricity.

As is the current trend, a majority of the countries in the region seek renewable energy solutions to meet their ever-increasing power demands.

In the same way, Sri Lanka’s political leaders too are in favour of implementing renewable energy sources such solar and wind.

However, according to Minister Karunanayake, the CEB had not recorded a single megawatt of energy in the form of solar power, to the national grid.

Even though implementation costs of renewable energy are much higher than that of other available energy sources, it was still an important energy source as it could save the country large sums in money.

The cost of power generated from thermal is rather high compared to others, with the cheapest is hydro. However, Sri Lanka cannot depend too much on hydro power as an alternative source needs would be needed in situations of drought.

Therefore, thermal has become the main source, but is not environment friendly and as a result, LNG has become the next-best option to renewable energy sources.

A normal practice has been where the CEB purchases emergency power in times of power shortage at comparably higher rates, from private parties.

Ultimately, these higher costs are passed down to customers.

Power and Renewable Energy Minister Ravi Karunanayake on Tuesday (5) claimed that the purchase of emergency power has been common practice for the past 15 years and that it was not the Minister who had decided to purchase emergency power this year. Instead, he said that the decision was made by the CEB Managing Director.

Amidst increased demand that cannot be fulfilled by the current local power generation levels, as claimed by experts, purchasing emergency power seems to be the only option left.

Politicians do not wish to take the risk of black outs or power cuts due to this shortage, especially in the current environment where elections are around the corner.

However, the real issue needs to be addressed.

The power generation plan was devised as a solution to the looming power crisis. However, successive governments failed to implement its mandate, developed to avert the impending shortage.

The lack of action by ministers of power and energy in the past 15 years is the cause of the current situation in Sri Lanka, as they were fully aware of what the future held but were unable to execute their duties.

February 24, 2019 bythemorninglk No Comments
The 40th session of the UN Human Rights Council begins in Geneva tomorrow (Monday) with Non-Governmental Organisations (NGO) set to battle it out with Sri Lanka on the human rights issue.