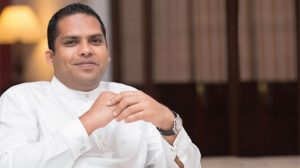 The ICC ACU officials have handed over a report to the new Sports Minister in Dubai.

Further, a senior ICC ACU officer is to be posted to Sri Lanka soon, a Tweet by the Minister further said.

I had a very positive meeting with ICC Anti Corruption Unit in Dubai today (Thursday, 27 December). They handed over a report to me, a senior ICC Anti Corruption officer will be posted to Sri Lanka to work with us. Looking forward to meet ICC President very soon to discuss matters further.

Before leaving to Dubai, the newly appointed Sports Minister wanted to request for an extension for the period granted by the ICC to put Sri Lanka Cricket (SLC) in order.

Addressing media after assuming duties in the new portfolio, Fernando said his first priority was to rid the country of the bad image created due to various corruption charges.

“I will meet ICC on the 26 or 27 (December). I will request for some time to re-establish the cricket board again. I will bring someone who is clean, who no one can find fault with, no one can point fingers at,” he told media after assuming his duties.

“There are a number of allegations. The biggest issue we are facing is that we have been named as the number-one country for corruption. That is our biggest issue. The main thing to do right now is get the country’s name cleared of the corruption.”

The ICC has given a 9 February, 2019 deadline to address the issues relating to SLC and its administration. However, due to the ongoing political situation in the country, Fernando was hopeful that the ICC would grant an extension of 60 days; a fresh deadline falling early April.

An Interim Committee to SLC

The Minister had further expressed his willingness to appoint an interim committee ‘as a number of issues need to be addressed’.

All appointments or extensions to service contracts at present have been halted until proper approval is given after evaluation.

“There have been attempts to make some appointments during the time there was a crisis. I put a stop to that on Thursday (20 December) afternoon,” he added.

With only six months to the World Cup, the Minister said that he will be taking action after reports by Mahela Jayawardena and Kumara Sangakkara are submitted.  The report was commissioned by Dayasiri Jayasekara when he was the Sports Minister.

November 15, 2018 byRevatha No Comments
Sri Lanka take slight edge on day two of the second Test in their bid to square the series.

October 24, 2018 byRevatha No Comments
Sri Lanka take a valuable 219-run lead in their second U-19 Youth Test against Bangladesh at Katunayake.