Helicopters request to fly at night in Colombo 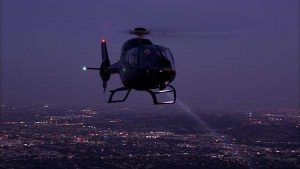 While welcoming the lifting of the 25-year-old ban on landing at the Galle Face helipad, Sri Lanka’s helicopter companies have requested the Government to relax regulations on helicopter flying times too.
Three of the country’s leading helicopter services, that wished to remain unnamed, told The Sunday Morning Business that they would prefer to operate even after 6 p.m. for the convenience of their international customers.
According to the operators, the Government has allowed domestic helicopter operators to fly only between 6 a.m. and 6 p.m. and have restricted flying during night hours.
When contacted, Aircraft Owners and Operators Association Captain Amal Wahid also said that it would be beneficial and cost effective if the Government relaxed flying hours for domestic helicopters.
“If our customers have their international flights scheduled at the Bandaranaike International Airport (BIA) during night hours, it would not benefit them to use air travel to reach BIA at day time, just to wait around for hours at the airport,” Capt. Wahid noted.
Further, if a helicopter is taking passengers around the country and fails to end the trip and comes back to its hangar before 6 p.m., it should be parked in a place with at least four armed policemen, according to Capt. Wahid.
Even though, the operators are fine with hiring armed guards, often the policemen are unavailable due to other duties. Therefore, often the helicopters drop their passengers at the respective destinations and would return to their hangar despite the distance between the travel location and the hangar.
The helicopters would return to the location in the morning the next day to pick their passengers which are additional expenses for the operators, Capt. Wahid added.
The industry requests follow the lifting of the ban on domestic helicopters from entering the city of Colombo on 17 January this year and allowing four of the selected helicopter companies to use the helipad of the Ministry of Defence at Galle Face.
The four operators who are allowed to use the helipad are IWS Aviation, Senok Aviation, Daya Aviation, and Sakurai Aviation.
Speaking to The Sunday Morning Business, three of these aviation companies commended on the ban lifting by the Government, as it would be more beneficial for customers, thereby increasing the number of passengers who use air travel.
According to the industry, only a helipad at Battaramulla and another one at Ratmalana were permitted for helicopters to drop their passengers who come towards Colombo. Even though the air travel time from the passengers destination to Battaramulla or Ratmalana would be somewhere around 30 to 45 minutes, the travelling time from the dropping location to the centre of Colombo would take over an hour, depending on traffic.
However, now with the lifting of the ban, the industry believes that their passengers would be able to reach their location in Colombo within a few minutes.

Fuel prices unlikely to be raised as oil prices stabilise

January 12, 2020 bythemorninglk No Comments
Fuel prices in Sri Lanka are unlikely to be increased as tensions between Iran and the US eased over the course of the past week, helping world oil prices stabilise after a panic-induced sharp spike.

New apparel factory in Koggala to create over 600 jobs

February 27, 2019 byCharindra No Comments
Aura Apparel Exports (Pvt) Ltd has opened a manufacturing plant in Koggala employing 400 workers, with over 200 more to be provided employment within the next two years.