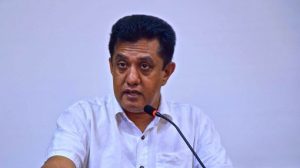 Herath said due to this he would not be taking up the Chairmanship of state-run, Lake House.

“I don’t want to take up the ministry position, as I want to concentrate on contesting the upcoming election,” Herath told The Sunday Morning.

“There’s an internal party agreement that whoever takes up a position in the 3 month interim government wouldn’t get party nominations for the forthcoming general elections,”  Herath added.

Herath further said he plans to contest from Kurunegala.

Dr Herath is a Department head at the University of Peradeniya.

He has formerly served as the Permanent Secretary to the Ministry of Mass Media and Information until January 2015 and has also acted as the Chairman of the Central Environment Authority.

December 2, 2020 byNethmi Liyanapathirana No Comments
The Ministry of Wildlife and Forest Conservation has issued a warning to local government authorities to dispose of their garbage elsewhere without dumping them in the vicinity or inside forest land.