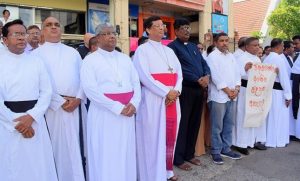 Last weekend, the entire country was on holiday mode, with the Sinhala and Tamil New Year falling on Sunday (14). While the entire day, from dawn to dusk, was to be spent on activities scheduled at auspicious times to observe religious and traditional rites, the Anuradhapura Methodist Centre was surrounded by fearmongers who were on a mission to disrupt the peaceful prayer meeting.

With main media houses too having closed for the Avurudu holidays, the incident did not gain traction immediately.

On Monday (15), Methodist Church Bishop Rev. Asiri P. Perera publicised a statement captured on video on his personal profile, narrating his firsthand experience of an angry mob that allegedly decided to delay him entering the centre, verbally intimidating him in the process.

“It was Palm Sunday and Fr. Dinuka and members of the centre had gathered to pray in the morning. The service started at 9 a.m. and I travelled from Kollupitiya to Anuradhapura that day and arrived at around 9.40 a.m. A group of people were blocking the entry road to the centre, and as soon as they saw my vehicle, they surrounded it.”

Rev. Perera had got off the vehicle and greeted the group for Avurudu. However, their response was not a peaceful one and they had started to verbally intimidate him. “I managed to gain entry into the centre, and soon after I entered the premises, they started pelting stones at the centre – they rained on the roof. Moreover, they even started throwing lit firecrackers at us.

“While we were not harmed by any of that, they were doing these with the intention of harming our members and disrupting our prayers.”

At the end of the prayers when the congregation was trying to leave the premises, they noted that the gate was locked. Rev. Perera had promptly called the Anuradhapura Police to alert them, and they had promised to dispatch their mobile unit to the centre.

“We were held hostage inside our centre. The group was growing in numbers with more people joining in with staffs and stones. We waited for more than half an hour, yet there was no sign of the mobile unit that was to arrive from the Anuradhapura Police station. I then contacted the Crimes Division in Colombo and informed them about the situation, and I also alerted the IGP.”

After the calls were made to Colombo, within five minutes, the mobile unit with several officers had arrived. According to Rev. Perera, the team had been dispatched to provide safe passage to the Bishop.

However, the Bishop had insisted that he be moved out last, after his members that were gathered along with Fr. Silva were safely taken out of the premises.

“Before we were moved, the officers also spoke to the group that was standing outside our centre. I am not sure as to what they discussed.

But after we were moved from the centre, Fr. Silva and I lodged a complaint at the Anuradhapura Police station against this group.”


Not the first time

According to Rev. Perera, the Methodist Centre was established in Kumbichchankulama, Anuradhapura 15 years ago to provide vocational training for the differently-abled in the North Central Province.

“We established this centre as a service to the community and over the years, about 500 differently-abled people have benefitted from the centre’s services. In the meantime, we have also allowed them to practice meditation and we also conduct prayers for Christians on Sundays.”

Speaking to The Sunday Morning, Fr. Dinuka Silva stated that this was not the first time the people from the area had threatened and intimidated a prayer meeting. “Last year, they had complained that the prayer meeting was making too much noise on Sundays, and later complained that too many people were visiting the centre on a day-to-day basis. Following that, we took measures to remove the PA system that was installed in the centre in January. However, we did not stop people from attending the vocational training programmes.”

The group had attempted to disrupt prayers on two other occasions leading up to the latest attack. According to Fr. Silva, the attack on 31 March was led by a municipal councillor. He said: “I complained to the Police following the attack on 31 March, but they did not take any action, neither did they summon the suspects to court.”

The events that had unfolded leading to the Palm Sunday attack seem to have escalated due to the inaction of law enforcement authorities. It is questionable as to whether this group was acting on behalf of a political group and continued to disturb the members who gathered to perform religious worship. Furthermore, if the group had continued to act in such a manner, they were clearly violating Penal Code Chapter 15 Articles 291 and 291 A. (See box)


The Sunday Morning contacted Anuradhapura Police Chief Inspector Sanjeewa Mahanama for comment about the incident. He said: “We were informed that a group of people had prevented the Bishop from entering the Methodist Centre in Anuradhapura on Sunday. Our officers visited the scene and recorded statements from both parties. No arrests were made as there were two complaints lodged; one from the Bishop and the priest from the Methodist Centre, and the other from the people of the area alleged to have attacked the church.”

When inquired as to why no arrests were made, Chief Inspector Mahanama noted that the case would be heard at court and based on the judge’s verdict action will be taken. He further stated that preliminary investigations had been carried out by the Anuradhapura Police soon after the incident was reported and the concerned parties were to be produced at the Magistrate’s Court on Wednesday, 17 April.

Meanwhile, Methodist Church Bishop Asiri P. Perera had also lodged a complaint at the Police Crimes Division in Colombo over the inaction of the Police in Anuradhapura following the repetitive complaints that Fr. Dinuka Silva had made at the respective police station on previous instances pertaining to the mounting threats experienced by him and the centre’s members, for which the court hearing was set to Thursday, 18 April.

With Wednesday (17) being the hearing date given to the Methodist Church in Anuradhapura, The Sunday Morning spoke to the Bishop’s legal counsel Ravindranath Dabare about the proceedings. He said: “Today we went to the Anuradhapura Magistrate’s Court expecting that the case would be heard. But all they did was escort Bishop Rev. Perera and Fr. Silva to record a further statement.”

We then inquired whether they had been notified about the next day’s court hearing pertaining to the complaint against the Police for inaction, to which Dabare responded that they are yet to receive a date for the hearing. “Although the Bishop was told that we would have to go to court on Thursday, we are yet to receive a formal notice about the court date.”

With several days passed since the fearmongering, the incumbent President is yet to issue a statement.

Today marks seven days since the incident and is Easter Sunday.
The Christian members at the Anuradhapura Methodist Centre are to conduct their prayer meeting today under Police protection.

Whoever voluntarily causes disturbance to any assembly lawfully engaged in the performance of religious worship or religious ceremonies shall be punished with imprisonment of either description for a term which may extend to one year, or with fine, or with both.


291A – Uttering words with deliberate intent to wound religious feelings

Minister of Tourism Development and Christian Religious Affairs John Amaratunga commenting on the recent attack, stated: “We strongly condemn attacks on any religious centres or churches, while we strongly believe in coexistence among religions that are practiced in Sri Lanka and it is a fundamental policy that this Government follows. As the subject Ministry, we have requested the Police to take stern action against all those perpetrators in order to prevent any further incidents taking place, be it against Catholics, Muslims, Hindus, or whatever religion.”

On Thursday, a meeting was called by Prime Minister Ranil Wickremesinghe to hear the full account of the incident. The Methodist Church Bishop Asiri P. Perera, Methodist Church Centre Fr. Dinuka Silva, IGP Pujith Jayasundara, and several others had attended the meeting.


The Sunday Morning learnt that the Prime Minister had instructed the IGP to provide Police protection at the centre during the prayers to be conducted on Friday and Sunday in view of Good Friday and Easter Sunday, respectively.

“The IGP agreed to dispatch a unit to provide us protection while the service is carried out. The Anuradhapura Magistrate’s Court was to take our case for a hearing, and they had summoned the people named by us for questioning,” Fr. Silva said.

Moreover, during the meeting, Bishop Perera had implied that Sri Lanka Podujana Peramuna (SLPP) party member Nalin Siriwardena had led the attack on the centre which took place on 31 March, and that the Anuradhapura Police had not acted on the complaint they made at the time.

July 29, 2019 bythemorninglk No Comments
The Government decided to absorb unpaid microfinance debt worth more than Rs. 1 billion incurred by over 40,000 women in the North, East, and North Central Provinces.

All eyes on SC