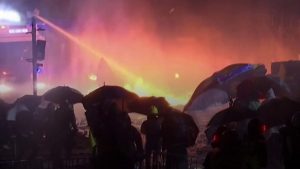 Police are surrounding a Hong Kong university campus after a fiery overnight stand-off with hundreds of protesters inside.

Dozens of protesters tried to leave after sunrise but turned back as police fired tear gas and rubber bullets.

Earlier, police tried to enter Polytechnic University but were met with petrol bombs and bricks.

Demonstrators have been occupying the site for days, as Hong Kong’s violent protests continue to escalate.

On Monday morning, the head of the university, Professor Jin-Guang Teng, released a video statement to protesters, saying he had arranged a deal with the police.

The protesters would be able to leave peacefully, Prof Teng said, if they stopped “initiating the use of force”.

If protesters left the campus peacefully, he said he would “personally accompany” them to the police station where he would “ensure your case is fairly processed”.

But the message seemed to have little effect – and the protesters remain inside the campus. BBC

October 9, 2018 byMalik No Comments
President Donald Trump has apologised to his new Supreme Court justice Brett Kavanaugh for what he described as a "campaign of lies" during the confirmation hearings.