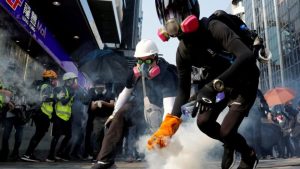 US President Donald Trump has signed into law a bill that supports pro-democracy protesters in Hong Kong.

The Human Rights and Democracy Act mandates an annual review, to check if Hong Kong has enough autonomy to justify its special status with the US.

Trump said he signed the law “out of respect for President Xi [Jinping], China, and the people of Hong Kong”.

China’s foreign ministry threatened “counter measures” if the US continued “going down the wrong path”.

Trump is currently seeking a deal with China, in order to end a trade war between the two countries.

“The US has been disregarding facts and distorting truth,” a Chinese foreign ministry statement said.

Hong Kong’s government also reacted, saying the American bill would send the wrong signal and would not help to ease the situation.

But a key activist in the Hong Kong protest movement, Joshua Wong, said the US law was a “remarkable achievement” for “all Hongkongers”.

Trump had previously been non-committal about whether he would sign the bill, saying he was “with” Hong Kong but also that Xi was “an incredible guy”.

However, the bill had widespread congressional support, which meant that even if he vetoed it, lawmakers could potentially have voted to overturn his decision.

The president also signed a second bill, which bans the export of crowd-control munitions to the police in Hong Kong – including tear gas, rubber bullets and stun guns.

“[The bills] are being enacted in the hope that leaders and representatives of China and Hong Kong will be able to amicably settle their differences, leading to long-term peace and prosperity for all,” Trump said. BBC