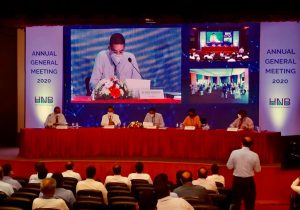 One of the largest banks in the country, Hatton National Bank (HNB), held its first “virtual” Annual General Meeting (AGM) on 29 May, according to a letter addressed to the Colombo Stock Exchange (CSE), by the bank’s Deputy General Manager (Legal) K.A.L.T. Ranaweera.
The bank’s 51st AGM was hosted both physically and virtually “in full compliance with the currently applicable health regulations”, the letter said. While the physical AGM was held at the Auditorium of the HNB Towers, shareholders unable to attend were able to take part in the event via a virtual platform.
Ranaweera stated that at the AGM, the General Membership was able to pass an “ordinary resolution” and a “special resolution”. The ordinary resolution proposed was a declaration of dividend and the approval of its method of satisfaction, while the special resolution proposed was an approval of the holders of voting shares under Section 99 of the Companies Act (No.7 of 2007) for the issue of shares by way of a scrip dividend.
The letter also stated that the directors of the bank, Amal Cabraal, Asoka Pieris, and Dr. Harsha Cabral, were unanimously re-elected, and KPMG Sri Lanka, the country’s oldest chartered accountancy firm, was appointed as the bank’s auditors for the following year.
HNB is the first company to hold their AGM online, and several other companies, including Amana Bank, Ceylon Tobacco Company, Sampath Bank, and Pan Asia Banking Corporation, informed the CSE that they will be holding their AGMs virtually as well, in response to the spread of Covid-19 and stay-at-home policies.
The CSE, in a statement dated 1 April, noted that they have received several inquiries pertaining to the hosting of AGMs, requesting guidance to comply with the mandatory requirement within the boundaries of an accepted framework in light of the pandemic.
Given the public health and safety concerns related to Covid-19, the CSE, “in its continued efforts to promote social distancing and discourage public gatherings”, has offered guidance in the form of a list of solutions in order to assist listed companies in meeting their obligation of hosting their AGMs. Two of these solutions included virtual AGMs and hybrid AGMs.
The statement mentioned virtual AGMs as an option of hosting company AGMs that comply with the regulatory requirements and restrictions imposed as a result of the Covid-19 pandemic. This may include electronic and teleconference mechanisms to host the AGM, such as Facebook Live, WEBEx, and Zoom.
As for hybrid AGMs, the CSE presented the option for a listed company to organise and host a meeting which would be simultaneously held at a physical and virtual location, and would enable a company to conduct its AGM with minimal physical presence which would mitigate the risk factor associated with the spread of the virus.

April 4, 2019 byCharindra No Comments
SriLankan Airlines today announced that it has formulated a new five-year Strategic Business Plan with the the aim of "returning to the ranks of the finest airlines in the sky".