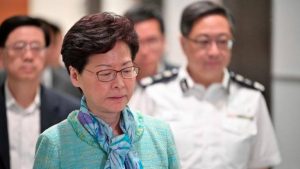 Hong Kong’s leader Carrie Lam has condemned what she called the “extreme use of violence” by protesters who stormed and vandalised the territory’s parliament on Monday night.

Activists occupied the Legislative Council (LegCo) building for hours after breaking away from a protest.

The chief executive held a pre-dawn press conference after police had fired tear gas and evicted the intruders.

Ms Lam called it a scene that “really saddens… and shocks a lot of people”.

Flanked by Police Commissioner Lo Wai-chung, she said the actions of those who broke into LegCo were “something that we should seriously condemn, because nothing is more important than the rule of law in Hong Kong”.

What happened on Monday?

Peaceful demonstrations had been planned for Monday, the 22nd anniversary of Hong Kong’s handover from British to Chinese rule.

The day is normally marked by an annual pro-democracy march – but this year’s event followed weeks of unrest in the city over a controversial extradition law, under which critics fear political dissidents could be sent to mainland China.

Around midday, dozens of demonstrators broke off from the main protest and made their way to LegCo. They effectively besieged the building, as a large crowd of several hundred watched from a distance, before eventually smashing their way through the glass facade.

Inside, they defaced the emblem of Hong Kong in the central chamber, raised the old British colonial flag, spray-painted messages across the walls, and shattered furniture.

At about midnight outside the building, protesters clad in plastic helmets and brandishing umbrellas retreated from a baton charge by riot police, who quickly overcame their makeshift barriers.

Within an hour, the streets around the building were clear of everyone except the media and police

What else did Ms Lam say?

The chief executive contrasted Monday’s tumultuous events with the annual peaceful march on 1 July, which she said reflected “the core values we attach to peace and order” in Hong Kong.

Her press conference, held outside Hong Kong’s police headquarters, was frantic, with a chorus of reporters shouting questions at Ms Lam.

Ms Lam showed little emotion as she stressed the importance of maintaining the rule of law in Hong Kong.

“I hope the community at large will agree with us that with these violent acts that we have seen, it is right for us to condemn it, and hope society will return to normal as soon as possible,” she told reporters.

The city’s leader strongly denied she was to blame for the LegCo assault because she had failed to address the protesters’ latest demands – which have broadened from simply dropping the extradition bill. They now include the release of all detained activists, and investigations into alleged police violence.

“It is not true to say that the Government has not responded. We have not responded to every demand asked because of good reasons,” she said.

“The bill will expire, or the bill will die, in July 2020 when the current LegCo term expires. That is a very positive response to the demands that we have heard.”

She also argued that granting an amnesty to all protesters would not be “in accordance with the rule of law”.

In an apparent warning to protesters, Ms Lam said Hong Kong’s authorities would “pursue any illegal acts” carried out by demonstrators.

Why do people protest?

Hong Kong is part of China but run under a “one country, two systems” arrangement, that guarantees it a level of autonomy, and rights not seen on the mainland. Pro-democracy events are held every year to mark the handover.

The demonstrations in June forced the government to apologise and suspend the planned extradition law, which is now unlikely ever to pass.

However, protesters have said they will not back down until the bill had been completely scrapped. Many are also calling for Ms Lam to step down.

The city chief reiterated on Tuesday that there was no plan to resume the debate on the bill.

August 6, 2019 byTSM Web Desk No Comments
Former US President Barack Obama has called on Americans to reject language from any of their leaders that feeds hatred or normalizes racism.

February 27, 2019 byRandev No Comments
US President Donald Trump has arrived in Vietnam ahead of his second summit with North Korean leader, Kim Jong-un.