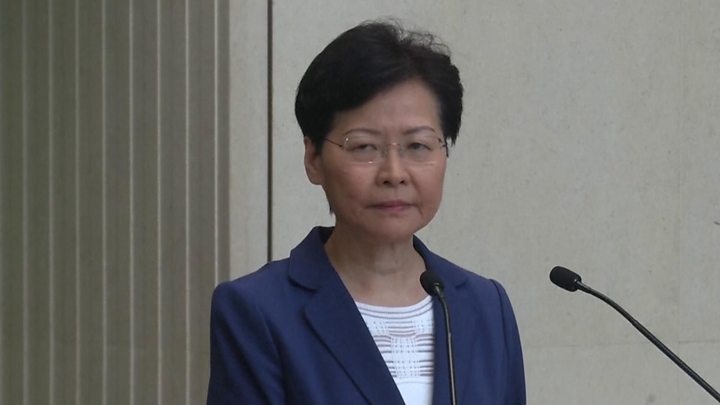 Hong Kong leader Carrie Lam has warned anti-government protesters not to push the city into an “abyss”, in an emotional press conference on Tuesday(12).

Lam warned that Hong Kong had “reached [a] dangerous situation” and that violence would push it “down a path of no return”.

She was met with hostility as she dodged questions by reporters, who repeatedly shouted and cut her off.

Mass unrest has rocked the city for 10 weeks and show no signs of abating.

The demonstrations first started to protest against a proposed extradition bill which has now been suspended.

But they have evolved into a more demanding pro-democracy movement, fuelled by fear that the special freedoms Hong Kong enjoys as a special administrative region of China are being eroded.

Lam appeared to be on the verge of tears on Tuesday at a press conference as she called on the protesters to put aside their differences.

“Take a minute to think, look at our city, our home, do you all really want to see it pushed into an abyss?” she said, according to AFP news agency.

Her comments echoed similar remarks by an official from the Chinese Liaison Office in Hong Kong, who said the city would slide “into a bottomless abyss if the terror atrocities are allowed to continue”.

Lam also evaded a question on whether she had the autonomy to completely withdraw the extradition bill, a key demand of protesters, saying she had answered the question in the past.

She appeared to defend police actions, saying they were under “extremely difficult circumstances”.

The Hong Kong leader said police operations could not have been “determined by someone like myself”, saying they had to make “on the spot judgments”.

Lam added that her role was to “ensure that Hong Kong remains a safe and orderly” city.

“After the violence has been stopped and the chaotic situation subsides… I will be responsible [for] rebuilding Hong Kong’s economy, to listen as attentively as possible to my people’s grievances and try to help Hong Kong to move on.”

Demonstrations started in June in opposition to a proposed extradition bill, which would have allowed suspected criminals to be sent to mainland China for trial.

Hong Kong is part of China but its citizens have more autonomy than those on the mainland.

It has a free press and judicial independence under the so-called “one country, two systems” approach – freedoms which activists fear are being increasingly eroded.BBC

Iran warns US against fueling tensions within the country

US imposes sanctions on Turkey over Syria attack

October 15, 2019 byTSM Web Desk No Comments
The US has imposed sanctions on Turkish ministries and senior government officials in response to the country's military offensive in northern Syria.