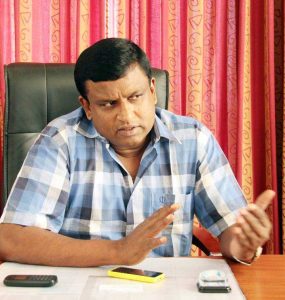 The Hambantota High Court Sentenced the Mayor of Hambantota, Eraj Ravindra to 5 years imprisonment over threatening several UNP Parliamentarians with a pistol during their visit to the Hambantota Harbour in 2014.

The case against Ravindra accused him of brandishing a firearm and chasing UNP Parliamentarians who were conducting an inspection tour in Mattala Airport and Hambantota Port.

However, Ravindra later claimed that the fire arm was just a ‘toy gun’.

At the 2018 Local Authorities Election, Fernando was re-elected as the Mayor of the Hambantota Municipal Council .

August 21, 2020 byMalik No Comments
A 12-member parliamentary selection committee, chaired by the Speaker of Parliament, was announced in the House today (21).

November 30, 2018 byEaswaran No Comments
A motion to suspend state funds to all Ministers and their personal staff, was passed by Parliament today.