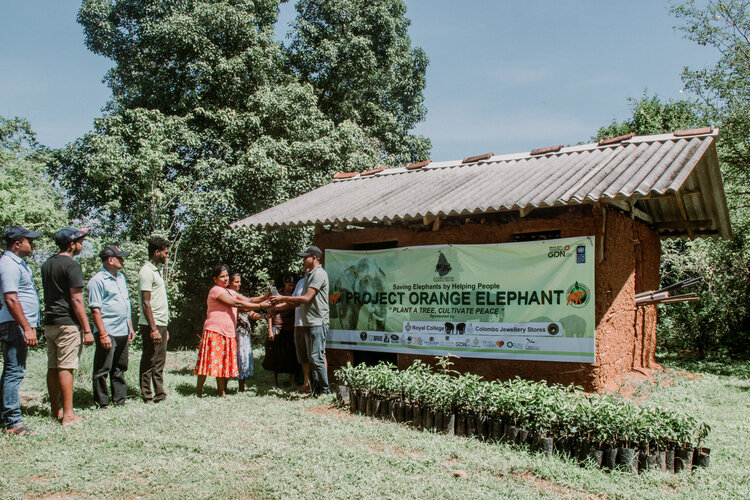 February 9, 2020 by Sarah Hannan No Comments

According to research findings shared by Centre for Conservation and Research, Sri Lanka (CCR) Chairman and elephant expert Dr. Prithiviraj Fernando, about 63% of Sri Lanka’s landmass is found to be elephant habitat and about 43% of the land extent is shared by humans and elephants, while 18% are protected areas in national parks.

Galgamuwa in the North Western Province is considered a hotspot for the human-elephant conflict (HEC). It comprises Ehetuwewa and Vilachchiya villages, and about 50% of elephant deaths are reported from these areas. Apart from these areas, the Ampara District too has a fair amount of HEC incidents. Conservationists note that Sri Lanka has the highest number of HEC cases and therefore, if any other country is to employ mitigation methods, they should consider what Sri Lanka is doing.

In January, during a Parliament session, Janatha Vimukthi Peramuna (JVP) MP Dr. Nalinda Jayatissa stated: “One government names an area a forest reserve due to the rich biodiversity of the area; another government degazettes it stating that the areas are earmarked for development purposes. Under such guises, land extents of 25,000 acres were assigned to the Moragahakanda project, 15,000 acres to the Yan Oya project, 7,000 acres for the lower Malwathu Oya project, and 15,000 acres in the vicinity of the Hambantota Port.”

Dr. Jayatissa also noted that in the areas of Demaliya Wewa and Ranawarunawa Wewa, about 6,100 acres have been earmarked for development projects and that there has been an increase in reports of HEC in these areas.

“As a resolution, 5,000 acres were to be appointed as an elephant management reserve, but that too has now been degazetted for development work.”

Dr. Jayatissa also questioned Minister of Environment and Wildlife Resources S.M. Chandrasena on allegations raised by environmentalists, stating the Minister had decided to distribute AK-47 rifles to protect villagers from wild animals. Responding to the question, Chandrasena had stated that it was a blatant lie and had he distributed assault rifles, he would not be suited to be the Minister of Environment and Wildlife Resources.

According to conservationists, the conflict between elephants and humans was created by humans. Speaking to The Sunday Morning, Wildlife and Nature Protection Society (WNPS) Chairperson for Human-Elephant Co-existence Jehan CanagaRetna revealed that the development-based relocation that took place over the past 50 years creating human settlements done in a haphazard manner has worsened HEC.

“Over the years, people have been put into places where elephants live and their settlements were established on the traditional paths which elephants traverse. Another reason for the increase of HEC is habitat loss for elephants with the establishment of national parks. Another concerning issue is that farmers living around Udawalawe National Park and Minneriya National Park are allowed to send in their cattle herds to graze the parks’ grasslands. This is essentially elephant fodder and when a cattle herd of 1,000 gets into their grazing grounds, they fall short of fodder, prompting the elephants to go towards the farmlands or villages in search of food,” CanagaRetna observed.

The famous crop raids are often done by loner bull elephants and only in very rare occasions would a herd follow. The elephant herds are headed by the matriarch followed by other cow elephants and calf elephants. They would always stick to the traditional elephant corridor to look for food and water, CanagaRetna elaborated.

While development needs to take place in the country, it should be approached in a sustainable manner. CanagaRetna added: “All aspects of conservation and environment need to be taken into consideration. There are several development projects done without a proper environmental impact assessment, or the assessments were not conducted in the right manner. Had they taken into consideration the specialist research on elephant habitats, they could have avoided establishing settlements amidst elephant habitats.”

Out of the many HEC mitigation methods put in place, the most effective seems to be fencing, i.e. fencing the farmers’ household and agricultural fields.

“The fencing is done by private institutions and is 90% funded by these institutions. We are now pushing the Government to invest in it while the farmer is also expected to put in some money and effort into maintaining these fences. The fencing around the agricultural fields is seasonal and when the crops are harvested, the fences are taken down so that the elephants could actually use the land for fodder, but the fencing around the household would remain permanently,” CanagaRetna added. Unstructured electric fences that run through the forest and wildlife habitat too are causing much trouble, with wildlife being trapped on either side of the fence. As CanagaRetna pointed out, the fence should be at the end of the forest patch bordering the village so that the wildlife is safely fenced off within their habitats and the village is safe from wildlife.

The Sunday Morning contacted Department of Wildlife Conservation (DWC) Director General Chandana Sooriyabandara to inquire about the steps that are in place to reduce HEC.

“Minimising HEC is not a task the DWC can do alone as it involves several stakeholders and institutions to put the process into motion. Human behaviour and the activities of other organisations and institutions largely contribute towards the increase of HEC. Therefore, we need to look at a multipronged approach to resolve HEC.”

While electrical fences were introduced to keep the elephants at bay, not all villagers were able to set up fences around their homes and fields. By now, even the elephants have started to realise that these fences can be toppled. In a video circulating online, an elephant was seen knocking off the fence pillars and climbing over the fence to get across the road.

Sooriyabandara revealed that the biggest obstacle the DWC is facing at present is the lack of manpower. He further noted that in order to maintain the electric fences, ideally, the Department would have to deploy one person for each kilometre of fencing.

“We made a request to the President and he has instructed the assigning of Civil Defence Force personnel, who could attend to maintain the fence. If the fence is not maintained, the elephants will knock the fence down and let the rest of the herd out of the perimeter, causing much destruction,” Sooriyabandara stated.

Elephant deaths are mainly caused due to railway accidents and Sooriaybandara said that the DWC is working closely with the Department of Railways to come up with methods to reduce the accidents.

“Lately, there have also been several incidents where elephants had fallen into unprotected wells amidst the fields. We are conducting awareness sessions for the farmers on how they should manage their fields and reduce such accidents,” Sooriyabandara added.

It is quite clear that the forest cover of the country is dwindling and the natural habitats of wild elephants as well as other wild animals are reducing. Meanwhile, the increasing human population density, coupled with development work, is encroaching into the perimeters as well. With wildlife losing their grazing grounds, they are involuntarily stepping into human settlements to find fodder.

This altered behaviour is causing an increase in HEC and while several methods have been employed in the past to temporarily fix this matter, there seems to be a lack of a permanent solution to the issue.

Elaborating on the carelessness of people, which leads to increased HEC, Sooriyabandara also noted that people tend to set out to their farms at the time the elephants cross the village in search of fodder or water. He also noted that if people are more observant about the behaviour of the elephants and understand their feeding times, accidents can be avoided.

“If the corridors are not declared, we will fail to reduce the ongoing HEC as their paths are not clearly recognised by the people. The relevant institutions should also consult the DWC when establishing new settlements and planning out development work, so they may not establish a village or a development project on the path of an elephant corridor,” Sooriyabandara reiterated.

Meanwhile, the Sri Lanka Wildlife Conservation Society (SLWCS) has initiated a project after studying elephants and their natural aversion to citrus. The findings of the initiative were recently published on Nature by Chathuranga Dharmaratne, Chandima Fernando, Chinthaka Weerasinghe, and Ravi Corea who are affiliated to the SLWCS. It states that the project is a conflict-specific holistic approach to mitigating HEC in Sri Lanka. The project is named as Project Orange Elephant.

The team pointed out that the need for land for human use is an ongoing encroachment of the existing elephant habitat, which is being diminished continuously and drastically and is contributing towards the increased number of incidents of HEC, ultimately resulting in deaths.

Most often, the people who suffer the most due to HEC are small-scale farmers who are burdened with poverty, have limited access to technology, and have to incur pre and post-harvest losses. With agriculture being their primary industry, they are often left without any additional income if their crops are destroyed.

During the study, the team also noted that HEC had increased due to inefficient landscape-level planning and land-use practices that are incompatible when attempting to coexist with elephants. Therefore, the team suggests that the solution to mitigate HEC must be based on the introduction of innovative land-use practices.

Focusing on the solution for this issue, the team conducted feeding trials with six Asian elephants at the National Zoological Gardens of Sri Lanka (Dehiwela Zoo) in 2006. The team noted that the results were very encouraging as the elephants showed an obvious distaste for oranges and several other citrus varieties.

Based on these observations, the team decided to launch Project Orange Elephant, which would not only keep the elephants at bay from raiding the fields, but would also function as a crop diversification, establishing an economic and trophic buffer for farmers living in the rural countryside for which close encounters with elephants during their day-to-day activities are commonplace.

The project uses a variety of grafted local orange (Citrus sinensis) known as Bibile sweet orange that had been developed in Sri Lanka to suit local climatic conditions. The variety is observed to grow well and does not need frequent irrigation, with fruits to be expected within one-and-a-half to three years. The fruit is known for its fresh sweetness, value-added products, and good market demand.

“By planting these trees alongside their crops, particularly in the border areas adjacent to elephant habitats, we hope to decrease crop raiding by elephants while also supplementing farmers’ income,” the team confirmed.

The project that was implemented in 2018 in Wasgamuwa has benefitted 12 villages in the area as of now with the orange trees planted around home gardens at farms to protect crops and rice stored in homes from crop-raiding elephants. The SLWCS believes the project can change the future of elephants and farmers.

“If we can get these rice farmers to cultivate oranges at least in the border areas adjacent to elephant habitats, then these farmers will have a primary income that is not susceptible to elephant depredations. This will contribute to creating co-existence in a landscape where people and elephants share space,” the team said.

November 25, 2018 bythemorninglk No Comments
From the time you step in to the society, you are constantly judged by outsiders on how you carry yourself.