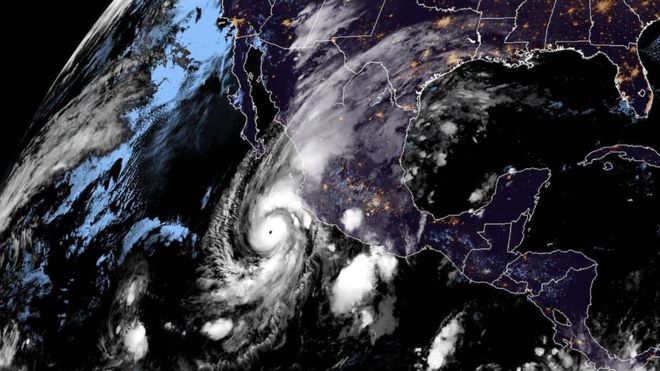 Hurricane Willa, a storm described by forecasters as “life-threatening” and “potentially catastrophic”, has made landfall in western Mexico.

Currently a category three storm, it has maximum winds of 195km/h (120mph) and is causing “an extremely dangerous storm surge”.

The National Hurricane Center has warned residents to stay indoors.

Earlier this month areas of the US were devastated by Hurricane Michael, which left at least 27 people dead.

A hurricane warning is in effect in coastal areas from San Blas to the tourist city Mazatlan, as well as Las Islas Marias.

The US’s National Hurricane Centre says the hurricane is expected to weaken rapidly after landfall, but has warned that the storm could still cause “life-threatening flash flooding and landslides”.

In Mazatlan, a popular beach resort, some residents were seen stocking up on food and water ahead of the hurricane’s arrival.

In the nearby town of Escuinapa, people have been gathering in shelters.

Hurricane Michael, which made landfall on 10 October, was the most powerful storm ever to hit north-west Florida.

Residents of Mexico Beach, one of the areas worst affected, described the aftermath as a “war zone”. (BBC)

‘Life-threatening’ storm starts to lash US

September 14, 2018 byMalik No Comments
The outer bands of Hurricane Florence are lashing parts of the US East Coast.