“I basically marched into the interview room” – Rehan Alexander Mudannayake

October 18, 2020 by Dimithri Wijesinghe No Comments

DIDI is the story of a young British Indian faced with a momentous decision when reunited with her long-lost sister. Directed by Rehan Alexander Mudannayake, the film has been selected – from over 6,000 submissions – for the Academy Award-qualifying HollyShorts Film Festival.

We reached out to Mudannayake, Founder of Odyssey Film Company and best known for his 2015 short film Elephant, which was about the Colombo elite in Sri Lanka, to speak about how DIDI as a project came to be, and how he as a Sri Lankan student, studying at University College London, came to direct a short film about Indian sisters reuniting; also that it got nominated by a prestigious film festival and praised by Academy Award nominee Deepa Mehta herself. 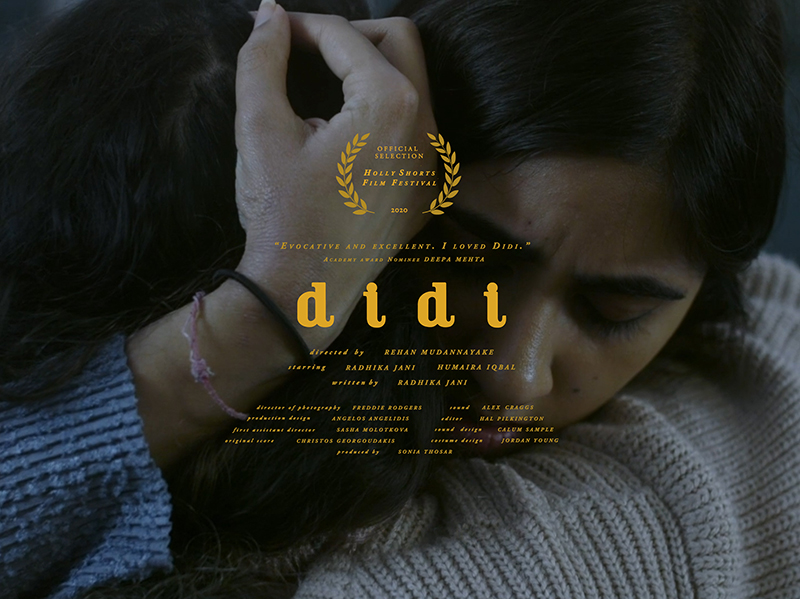 How did this project come about? How did you happen upon this story and why did you choose to tell this particular story?

I was a couple of months into my degree at University College London (UCL), and I was studying a mix of cinema, political history, and cultural studies with a focus on cinema and when I began to feel a little restless because my degree was entirely theoretical, this was a conscious decision I made, but I felt compelled to get out into the field and make a film during my time in London. So I was rather thrilled when my friend came to me and said that our university film society is commissioning a series of short films.

I didn’t know much about UCL’s film society so I did a bit of digging and found out that Christopher Nolan (who directed the Batman films) was part of their past alumni and was president of the film society, where he started making films; it was where he first met Emma Thomas, his long-time production partner, and also his wife.

I then had a read of the selected script for term one and it was just the most moving and most powerful script I had read in a long time. It was written by a very, very young 21-year-old English literature graduate, Radhika Jani, and it was her very first script. It was the most thought-provoking piece of writing I had read in a long time, and I thought to  myself I have to make this film. I basically marched into the interview room and demanded that they give me the position.

I was lucky enough to be given the directorial position and basically spent the next two or three weeks prepping for the film which was shot over two nights.

One of the very first conversations Radhika and I had in pre-production was how frustrated we were with the depiction of the South Asian community in western cinema. We’ve all seen films that focus on young women being forced into arranged marriages and beaten by their abusive husbands. Not to say that these stories aren’t important or relevant, but we thought that it was time to expand the industry’s repertoire to other stories as well, and I think that is how DIDI came about.

The film society very graciously funded the film, and I think we ended up casting it through social media Insta stories; we put out all these casting tweets, WhatsApp messages, emailed amateur theatre groups, and in two days we had 16 South Asian actresses walk in through the door and audition for us. We then had about a week to rehearse and then over the course of two days we shot the film. I remember we started on a Saturday at 5 a.m., finished at 12 a.m., and then went back to set on Sunday at 5 a.m. and ended at 5 p.m. It was just the wildest shoot ever but so much fun.

What was great about this film was the fact that for a lot of the crew it was their very first time making a film, and a lot of them were studying other subjects – everything from philosophy to English literature, economics, and human sciences – but everybody was bound by this love for cinema and it was just the most amazing team.

Editing took about a year; I sat with my fantastic editor Hal for maybe two to three nights every week, and I think by September last year we finished cutting it.

The story is of a British Indian girl and her journey. As a Sri Lankan born educated largely in England, what was your experience like directing this particular story?

Even though it was directed over there, my experiences are quite different than those of the characters of the story, and I really relied on this fantastic team of women that I worked with to help me check my ego and essentially make sure I portray the story in an authentic, meaningful, and respectful manner.

What was also fantastic about the film crew was that over 60% of the crew were international students and I think 70% of the set were women; I think that representation was key to making a film of this nature. Essentially every single change that was made during pre-production was sanctioned by Radhika – I mean we had a whole list of changes and I would sit down with her and discuss them and make sure that we were on the right track and make sure I didn’t misrepresent the characters of the film.

DIDI has been selected for the HollyShorts Film Festival. What does this mean to you as a filmmaker, to be accorded such recognition? And do you think your film has what it takes to win?

I have gotten into other film festivals but this is probably the biggest one so far, and essentially a festival’s Oscar accreditation means that if it wins at a festival, it gets admitted to the Oscars. So yeah, I am just chuffed that we got this far and it is just amazing.

And whilst I do believe the film has the potential to win, just the mere fact that it has gotten this far in HollyShorts is just the most amazing feeling.

Academy Award nominee Deepa Mehta said about your film: “Evocative and excellent. I loved DIDI.” How did that make you feel?

I nearly fell off my chair when I received her comments on the film. She is one of my cinematic heroes, one of the world’s greatest directors, a true visionary, and one I have learnt a lot from. So I was just so thrilled that she watched my film and liked it. It meant a great deal to me.

As the Founder of film production studio Odyssey based in Sri Lanka, in your experience, what can you say about the state of the Sri Lankan film industry; where are we at on a global scale, and why do you think we are where we are?

I mean, sure, we have been hit pretty hard by Covid, but we are a resilient lot and I have no doubt we will bounce back.

How did you get into filmmaking and what’s it been like as a Sri Lankan who makes films? What can you say to anyone who wishes to pursue it as a career?

I have always wanted to be a filmmaker and I think I was inspired by my mom and her love for photography. From a very young age I learnt how to load 35 mm into a point and shoot a camera, and I think that inspired me to then pick up a video camera and start telling stories.

If making films is your calling, you should absolutely pursue it as a career. It is not lucrative when you first start out and I think you are going to have to be creative with how you make money. I for one have spent the last six to seven years directing ad campaigns for corporates and shooting documentaries for NGOs (non-governmental organisations) and the UN (United Nations), and that is how I have been able to fund my short films. I think you have to be a little thick-skinned and must prepare yourself for rejection and years of failure if you do want to succeed eventually.

What are your thoughts on the current trend of filmmaking, which is essentially adaptations and sequels aimed at getting people to the cinemas? Is it important to make art house films and thought-provoking short films that appeal to a few, or is it necessary to appeal to the masses?

I think it is a crying shame that the vast majority of adaptations and sequels coming out these days suffer from lazy unoriginal storytelling.

As for the rest, I think it is a personal choice. I personally want to make films that are critically acclaimed but also have widespread appeal amongst the masses. I certainly don’t believe in making a film that goes to a fancy film festival and is only understood by an elite group of film critics and wins an award and is never watched again. I certainly want my films to live on and I want my film to appeal to as many people as possible.

And I think there is a way to do that, to hit that middle ground while maintaining one’s creative integrity.

What are your plans for the future? Any upcoming projects you can share with us?

My most exciting upcoming project is “Funny Boy”, Deepa Metha’s adaptation of Shyam Selvadurai’s literary masterpiece in which I play one of the leads.

A foot stomping celebration of one of Britain’s brightest stars: Bohemian Rhapsody

Ushering in the heart and soul of Indian cuisine