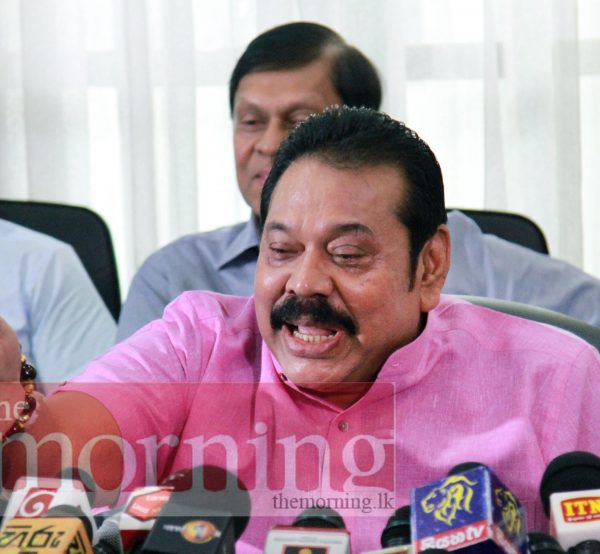 Former President Mahinda Rajapaksa today said that he had not met the Keith Noyahr, the Defence Correspondent of the now defunct newspaper The Nation, who was abducted and tortured back in 2008.

Responding to a query by a journalist who asked whether the former President can recall the incident where Noyahr was abducted, Rajapaksa said, “I can say very clearly that I have not met Kieth Noyahr.”

During a special media briefing held at former President’s official residence in Colombo 07, several Joint Opposition (JO) politicians at the head table obstructed Rajapaksa from responding to the question asked by the journalist claiming that the media briefing was held to talk about the impact of the Sri Lankan rupee depreciation and the abduction incident was in no way related to that.

Rajapaksa has told the reporters that the CID asked him about two telephone calls made to his phone by Speaker Karu Jayasuriya, then a minister in the Rajapaksa administration, and Lalith Alahakoon, the chief editor of the Nation.

The former President has said that he could not recall the telephone calls said to have been made to him by Jayasuriya and Alahakoon.

“I don’t remember such a call,” Rajapakse said. “I asked them (the CID) whether it was wrong to have released him (Keith Noyahr).”

The statement recorded from former President Rajapaksa was submitted to the Mt. Lavinia Magistrate’s Court on August 20.

April 28, 2019 byRandev No Comments
Under the Emergency Regulations, the covering of the face to avoid identification has been banned.