I took criticism ‘on behalf of Central Bank’: PM 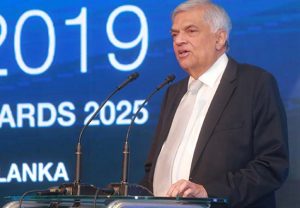 Prime Minister Ranil Wickremesinghe said today that he absorbed criticism on behalf of the Central Bank when the private sector was criticizing the tightening of monetary policy over the past few years.

“From 2015 we have handled the debt and stablised the economy. Of course you blaggarded us for high interest rates and for money not being in the market. Actually, I took the blaggarding on behalf of the Central Bank,” he said.

Wickremesinghe made these remarks addressing top level corporate leaders and businessmen at the 2nd session of the Sri Lanka Economic Summit 2019 which commenced today (17) at the Cinnamon Grand Colombo.

He went on to say that the Government’s policies have proven to be successful and that a Government must be willing to take unpopular decisions when necessary.

The summit, organized by the Ceylon Chamber of Commerce, concludes tomorrow.

May 17, 2020 byCharindra No Comments
The Colombo Stock Exchange suffered a net foreign outflow of over Rs. 3.5 billion in less than eight hours of trading over the past week, but there was keen buying interest from bargain hunters.