Sri Lanka in Group ‘A’ with title defending India 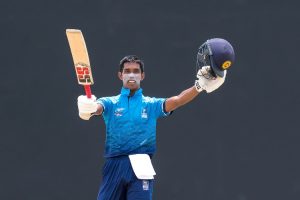 Sri Lanka will aim to be in a thorn in the side of their Group ‘A’ rivals and will be out to recreate their feats of 2016 that saw them reach the semi-finals in Bangladesh.

They will be high on confidence after victory in a tri-series with England and West Indies in the Caribbean just two months ago, beating England by 77 runs in the final at Coolidge.

Their batting was particularly strong in the tri-series, sporting four of the top five run-scorers in the tournament, with Kamil Mishara leading the way with 230 runs.

Leg-spinner Kavindu Nadeeshan was the best of the bowlers, snaffling 18 wickets at ten apiece and only conceding 3.39 runs per over.

Reigning champions India will test their title credentials in Group ‘A’ of the ICC U19 Cricket World Cup.

Paras Mhambrey’s men were an all-conquering force in 2019, winning the Under-19 Asia Cup in September and a Tri-Nations tournament with England and Bangladesh held on English soil.

They have not lost a bilateral series since the 2017 U19 World Cup, beating South Africa, Sri Lanka and Afghanistan away from home.

If India are the U19 World Cup’s most successful-ever team, winning four times, New Zealand is the home of the event with the famously welcoming nation having hosted the event three times, more than any other.

The Black Caps underachieved on home soil in 2018, finishing eighth, and will be looking to bounce back from recent series defeats to Bangladesh (4-1) and Australia (3-0).

They will be captained by Wellington’s left-arm spin-bowling all-rounder Jesse Tashkoff and coached by Paul Wiseman.

“We’re very happy with the squad we’ve selected and believe the group will give us the best chance of success – but we’re under no illusions how tough it’s going to be.”

Japan round off the Group A line-up, participating in a global event for the first time.

Eleven of their squad will be eligible for the 2022 U19 World Cup and their players will doubtless soak up plenty of experience from competing against established Test nations.

The team, coached by Dhugal Bedingfield and captained by Marcus Thurgate, will hope to pack a punch with off-spinner Yugandhar Retharekar capable of breaking up batting line-ups.

November 1, 2018 byRevatha No Comments
The Indians beat the West Indians 3-1 in the five-match ODI series in India.

November 6, 2018 byRevatha No Comments
Kumara thus becomes the third Sri Lankan player, after Danushka Gunathilaka and Jeffrey Vandersay, to be axed from their squad for serious breaches of discipline.