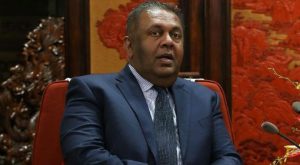 Has Finance Minister Mangala Samaraweera fired the first shot in the ideological battle that I argued for in “Horizons” last week? His forthright public remarks last week about Sri Lanka not being “a Sinhala-Buddhist country” seemed to have scored a “direct hit”, judging by the various sharp reactions by the Sinhalese, both laity and clergy.

Although not many (yet), the reactions were heated, expressed outrage, and included questioning the political standing of Minister Samaraweera and his very status as a citizen of this country. Such responses indicate the degree to which this matter of ethno-religious identity dominance is significant to the self-conception of Sri Lankans as “citizens” constituting a specific “nation-state”.

The contest of ideas here is between the understanding that Sri Lanka’s cultural identity description should include the features of all major ethno-religious communities living on the island on the one hand, and on the other, the understanding that the cultural description of the country should be based purely on the identity of the community with the biggest population. That is, whether Sri Lanka is a “Sri Lankan country” or a “Sinhala-Buddhist country”.

At first, it might appear as a legitimate argument. But tagged on to this argument over ethno-cultural identity is the far more crucial issue of the relative rights of the various identities that make up the population of “citizens”. In other words, there is the often the explicitly expressed view that the largest ethno-religious community may legitimately claim a more privileged status as citizens, over the populations of the other communities.

The question of “who” we are in terms of our conditions of daily existence is decisive for our survival and fulfilment as individual humans and groups. It is our citizenship status that decides what rights we are allowed to exercise as individuals and groups and what facilities we may access in order to, not just physically exist/survive, but also to thrive and fulfil our aspirations.

What is critical to keep in mind, therefore, is that our ability to survive and thrive is necessarily tied to our “belonging”. Put simply, whether or not we are citizens of a particular nation and state dictates our survivability. Here, I am not going to waste time discussing the mythical and wholly exceptional circumstance of being a Robinson Crusoe (an individual surviving all alone on a desert island).

As the vast corpus of narratives/discourses of civilisation – whether religious, mystical, philosophical, or aesthetic – generally concludes, the human condition is one that intrinsically combines one’ s seeming physical singularity with the plurality that comes with being part of a community. After all, our very birth – i.e. our physical coming alive – is not achieved on our own but through other humans acting in concert. Our post-natal survival and physical and mental maturing are all achieved through the concerted actions of others. And, the more organised and effective that concerted action by others, the more equipped we become to live our own lives.

In our era of enhanced levels of organisation and efficacy, therefore, society and state are essential pre-conditions for our individual survival and fulfilment. Therefore, we must exercise the function of citizenship and submit to the delineation of identity that enables us to “be” citizens. If we did not “belong” to a nation-state, to that degree, the lack of citizenship undermines our ability to survive and thrive.

In our own country, for example, the very process of our emergence as a modern nation-state on attaining our freedom from colonial rule also involved (sadly) the deliberate deprivation of citizenship from a whole group of citizens who were identified as a distinct community whose very definition of identity disqualified them from citizenship. By legislation, in 1948-49, even as our collective freedom from colonial rule was achieved, a section of our nation was defined as a community of people of “recent Indian origin” and was declared as non-citizens, rendering them “stateless”.

The Indian Tamils, as they came to be called, were deprived of their right to vote (disfranchised). And for about three generations, many of them remained stateless.

Their physical survival depended not on state and nation, but on their employers – the tea and rubber plantation companies. As long as they worked for those plantations, they were provided housing and rudimentary medical and educational facilities.

The terrible, brutal irony now indelibly recorded in our national history, is that it was this very same stateless, disfranchised community that produced the biggest income for the country, an income that enabled the State to provide many facilities free of charge to the rest of the population, such as free education and healthcare and subsidised public transport. The estate Tamils (as they were then called) became the poorest, least literate, and most malnourished part of the population.

Thus, there was a stark parallel of early modern Sri Lankan “democracy” with ancient Greek democracy in which “all” were citizens with the right to vote except for the slaves (who often outnumbered the citizens) and the women.
Even today, there are probably Sri Lankans who will want to logically justify that

Of course, over several decades of untiring struggle, that community, which now bravely calls itself the “Hill Country Tamils”, was finally able to negotiate its return to Sri Lankan nationhood. That struggle, however, also saw a large section of that community being sent off quite arbitrarily (they had no say in the matter) to India where they were granted citizenship.

Many, if not most, modern nation-states have similar histories of forced exclusion through law or marginalisation through social practice. In fact, it is this ethno-social exclusion dynamic and not religious fundamentalism that has engendered the most number of insurgencies in the modern world (past and present) from India to Pakistan to Burma to Mexico to Peru to the UK and the Philippines and many other places.

Palestine-Israel is a sick case on its own, arising from a new form of colonial occupation and exclusionary state practices now bordering on genocide. Just take a look at the continuing spread of (illegal) Jewish settlements on Palestinian territory and the physical, social, and mental state of the Palestinian population living for the last 70 years under the most extreme conditions.

The Naga insurgency is a good example of an ethnic community insurgency that has been waged for since the birth of the Indian state in 1948. The Filipino Communist insurgency still continues – an articulation of socio-economic deprivation and marginalisation for over half a century.

Our own multiple insurgencies, although all have so far been militarily suppressed, are also the articulation of a mix of ethnic exclusion and socio-economic deprivation. The fact that these insurgencies have only been suppressed and not resolved means that the underlying causative social conditions remain. The potential for future insurgency remains, therefore. Only an easing of those grievances will reduce or eliminate that potential.

So much has been written about the causes of socio-economic class conflict and ethnic conflict in Sri Lanka that it might seem repetitive to further discuss them. But, today we face an insurgency that is potentially so ferocious and destabilising that there is now a far greater urgency to address these causes in order that they do not further contribute to worsening the current situation.

None other than the Commander of the Army, Lt. Gen. Mahesh Senanayake, last week, succinctly described the nature of the current outbreak of insurgency. He pointed out in a combative exchange with journalists at a news conference on Thursday (16) that the current insurgency is starkly different from the insurgencies that the Sri Lankan armed forces have dealt with (and militarily defeated) in our life as a nation so far.

Very ably fielding the often hostile questioning by the journos, the amiable Commander (a veteran of both counter-insurgency and the conventional war with the LTTE) pointed out that difference. The previous insurgency – he focussed most on the epic contest with the LTTE – was basically over territorial control. Thus, it was positional warfare, which made it relatively easy for the armed forces – being intrinsically at an advantage due to state resources and legitimacy – to defeat the LTTE.

What he did not have time to mention was that in the early stages of the Tamil separatist insurgency, when the militant groups were conducting very small scale guerrilla warfare, the security forces were finding it quite difficult to deal with them. However, when insurgencies begin to succeed, they almost automatically transform into territory-based positional warfare and that is when the state forces come into their own and become effective.

However, the current insurgency, the Commander pointed out, was not based on a struggle for territory. Rather, its objective is ideological – in the current case, the triumph of a specific version of a religion (Wahabbism). Thus, self-motivation is a prime mover and this enables an extremely micro-level of warfare, almost at the level of the individual suicide bomber.

This is why I reiterate that ideological warfare is key to the defeat of this pseudo-Islamist insurgency. The Commander also did not have the time to mention the other major prime mover in insurgency – social grievance of a sizeable section of the population. The JVP insurgencies reflected this causal factor. Again, due to the depth of social rootedness of the JVP insurgency, its suppression took time.

The NTJ/JMI insurgency is not even socially rooted. Again, the importance of ideological contest is thus indicated. Thus, the most urgent need – even as the insurgents are hunted down – is to ensure that no social or political factors create social constituencies that could sustain the insurgency.

Therefore, the outlook of the Muslim community and its relations with the other ethno-religious communities in the country is critical.

The very fact that it has been largely Sinhala-Buddhist mobs that have recently attacked Muslim shops and mosques indicates the hard fact of the problematic attitude of the Sinhala-Buddhist population towards the other communities.

The ideology of Sinhala-Buddhist supremacy then becomes a paramount factor. As long as this ideology prevails among the bulk of the population, it is impossible to begin to re-arrange inter-ethnic relations in a manner that will permanently reassure the other communities of their right to equal citizenship and security on this island.

This is why Minister Samaraweera’s salvo must become part of many initiatives that will engage with this ideological challenge. The secret of this ideological struggle will be to remove what seems to be enduring anxieties among the Sinhala population about their own community survival – even though they already dominate the State.

Sri Lanka’s Counter Terrorism Law: Why your name may matter

October 16, 2018 bythemorninglk No Comments
Imagine two persons are arrested at the same time. Let’s call the first Asanka and the second Asif.

Get the priorities right

March 31, 2019 bythemorninglk No Comments
Sri Lanka has spent billions of dollars in building massive white elephants when the most urgent need for many years now has been the reliable supply of electricity. As a result of years of misdirecte