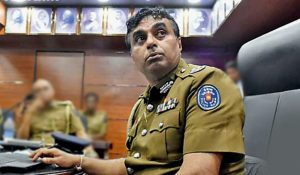 Inspector General of Police (IGP) Pujith Jayasundara, has been admitted to hospital as he has fallen ill.

Jayasundara was admitted to the Police Hospital a short while ago, while he was issued notice to appear before the Criminal Investigations Department (CID) for questioning.

He was summoned before the CID today (02) in order to record a statement in relation to the Easter Sunday attacks.

Earlier today, former Defense Secretary Hemasiri Fernando who was also summoned before the CID for questioning was taken ill and was admitted to the ICU of the Cardiology Unit at the National Hospital.

August 20, 2018 byEaswaran No Comments
The Prime Minister’s office has mixed up the year of the devastating tsunami which hit Sri Lanka, saying it took place in December, 2005 when it actually occurred in December, 2004.