Image of Parliament and all representatives tarnished: Mahinda Amaraweera 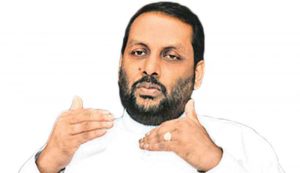 Sri Lanka Freedom Party (SLFP) stalwart and General Secretary of the United People’s Freedom Alliance (UPFA) MP Mahinda Amaraweera asserted that the embarrassing behaviour by parliamentarians could result in parliamentary sessions being restricted to the public, particularly students and the diplomatic community.


Has Parliament lost respect as a result of the way some MPs behave and the words they use?

Definitely. I’ve been a Parliamentarian since 1994 but I have never seen such bad conduct in Parliament as we are seeing today. Because of such misconduct by MPs, the image of Parliament and all of the peoples’ representatives in it are being tarnished.

In addition, the parliamentary system itself is being humiliated. It is a very unfortunate and disappointing state of affairs we are currently seeing. It has become so bad that soon, school students may have to be restricted from coming to Parliament to view proceedings. We may have to put a notice stating “adults only”.


What steps do you think your political party needs to take to control your MPs?

There was a discussion held with all Sri Lanka Freedom Party MPs where the President strictly ordered all MPs to refrain from engaging in such obscene behaviour and to ensure the respect of Parliament with their conduct in the chambers and outside.


Certain MPs have bad track records and have even been met with various allegations outside of Parliament. Should such MPs be in Parliament in the first place?


Do you think the public needs to be educated far more on the representatives they elect to Parliament, to ensure those elected have a good standing in society?

Yes of course. The voters must look into what sort of individuals have been nominated by the political parties. They must find out what sort of histories these people have and their present standing in society. It has now become a norm where such corrupt persons are being repeatedly voted into Parliament, and such a trend must stop. That is the responsibility of the public as they must not vote for such people, even if they have been nominated by a political party.


Parliament recently approved a code of conduct for MPs. Is this code taken seriously?


Should there be a stricter system in place to ensure MPs respect Parliament?

Also, in the long run, it is also the duty of the voters of this country to remember those who have misbehaved in Parliament and have a record of bad conduct when they are going to the ballot booths and make sure they don’t cast their votes for such people.


Parliament is open to students, members of the general public, and the diplomatic community. Should this be restricted if MPs are going to continue to behave the way they’re behaving?

Yes. If this sort of behaviour continues in Parliament, I would say it would be best if all outsiders are restricted from entering Parliament for the purpose of viewing the sittings. Such atrocious behaviour before the diplomatic community is also worrying as the goings-on in Parliament have a direct impact on the country’s reputation before the international community. So therefore, we will have to stop those in the diplomatic community from entering Parliament to view sessions as well, as it is crucial to ensure that our country’s image in the face of the global community is protected.


Can Sri Lanka adopt some of the best practices seen in parliaments in some western countries?

Well, in parliaments of other countries too such misconduct by parliamentarians takes place. But the difference is it doesn’t happen as frequently as it does in Sri Lanka or to such extremes. It happens rarely in other countries, but in Sri Lanka, it has become a tradition – a norm.

Another unfortunate thing is the fact that when these errant MPs visit their electorates in the villages, the people there still welcome them with open arms despite their bad behaviour in Parliament. If they were unable to stop such people from being voted into Parliament, at least now, the voters should call on the public representatives to stop such behaviour in Parliament. The voters should call out such MPs and embarrass them for their misconduct.

Rising from the ashes

May 3, 2019 bythemorninglk No Comments
The Sunday Morning spoke to leaders in the business community to get their views on how they felt Sri Lanka should move forward, down the path to recovery.

Role of media under scrutiny

June 24, 2019 bythemorninglk No Comments
The Easter Sunday attacks and its aftermath brought into focus many social aspects that citizens, as well as the State, need to change, given the new conflicts that have arisen.