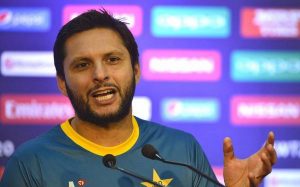 The Coronavirus pandemic has hit the Pakistan Cricket Board (PCB) hard, with the international and domestic teams struggling to get sponsors amid this global crisis. While PCB’s deal with its existing sponsor – a global beverage giant – has expired, the men’s national team (currently in England) is expected to play without a sponsor. Amid such a scenario, Azhar Ali & Co. are set to feature the logo of former skipper Shahid Afridi’s foundation on their kits.

“We’re delighted that the @SAFoundationN logo will be featured on the Pakistan playing kits, since we are charity partners to @TheRealPCB. Thanking #WasimKhan & the PCB for their continued support & wishing our boys all the very best with the tour #HopeNotOut,” Afridi tweeted from his official account as he announced the news to become PCB’s ‘charity partners’.

Pakistan have arrived in England to play three Tests and as many T20Is. As a few pictures of their training surfaced on social media, it could be seen that the players didn’t have any sponsor’s logo on the kits.

After PCB’s deal with the beverage-maker expired, it did invite new bids but was taken aback when no new bidder came. Other than a bid from the previous sponsor, the board failed to get a single brand interested in the national team’s sponsorship rights. The only bid that came was also 35 to 40 percent lower than the previous deal.

PCB’s marketing department has been struggling quite a bit to get money into the board. In fact, as things stand, the PCB will have to bear the expenses of its domestic teams and tournaments itself as the marketing team has failed to get a sponsor.

Meanwhile, Shahid Afridi’s foundation has been making headlines in Pakistan for its charity work, especially since the Coronavirus outbreak began. Afridi himself travelled all across the country to feed the poor and needy through his foundation before contracting the virus.

Through the charity partnership with PCB, Afridi would hope to get some more funds from all across the globe in order to continue his philanthropic work in Pakistan. Whether this deal will have any monetary benefit for PCB or not, isn’t yet known.