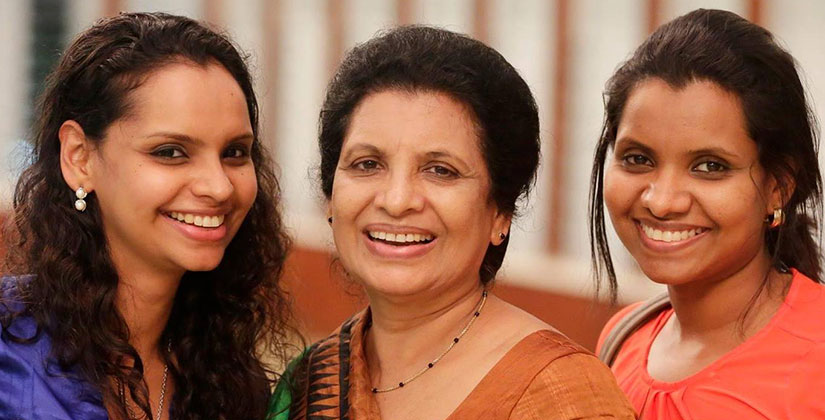 In memory of a beloved mom

July 22, 2019 by Jennifer Anandanayagam No Comments

For Tharanga Mayadunne, her mother Shantha Mayadunne and sister Nisanga Mayadunne – both of who were taken away from her exactly three months ago by the Easter Sunday attacks (21 April) that shook our island – were the women she was closest to in life.

“I looked up to them and depended on them so much. They have made a mark in my life with everything they’ve done, and I am so proud of them,” said Mayadunne.

Her sentiments were shared with Brunch Talks when she spoke of the launch of her late mother’s newest book – ශාන්තාගෙන් ඔබට රස බොජුන් 3 (Rasa Bojun 3) – which took place Thursday, 18 July, something Mayadunne took upon herself to do because it was what her mother would have wanted. “This book was launched as a tribute to my mom and to make her final wish in her culinary journey come true.”

The collection of 50 recipes – 10 curried rice recipes, 10 special curried rice recipes, 10 salads, five drinks, five desserts, five soups, and five short eats – has been in the works for four years and had been almost fully completed, ready for publication right before Shantha Mayadunne’s demise. “She (Shantha) had even gotten a write-up done on the book by Prof. Sunil Ariyaratne a few weeks before she died. She spent a lot of time and effort developing this book and she was very proud of the outcome.” 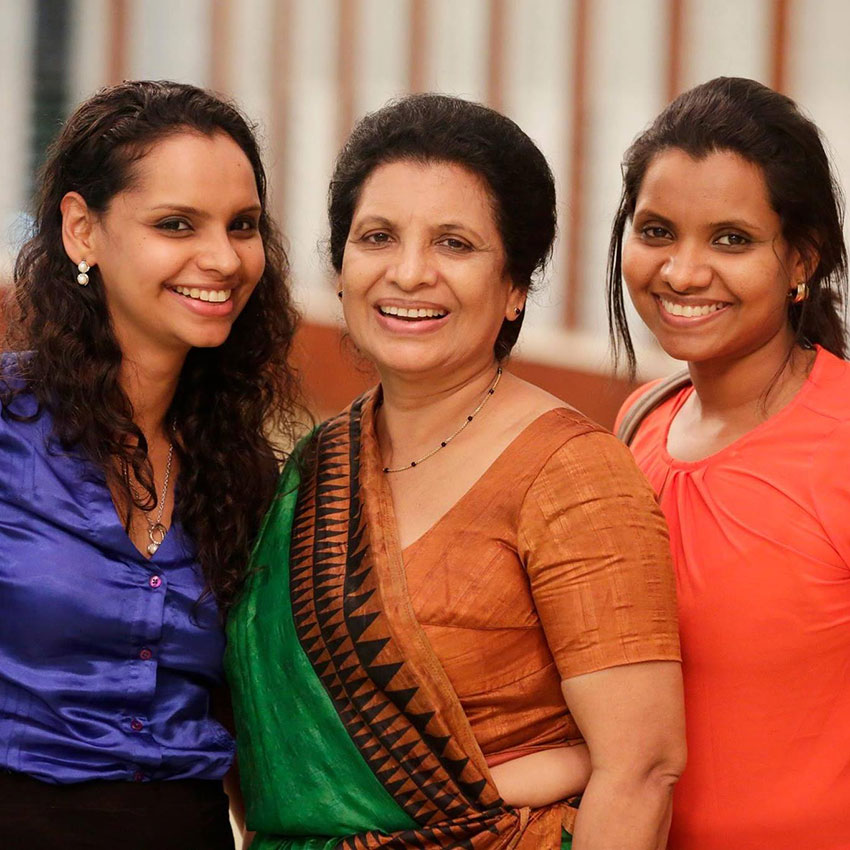 Recalling how her mother was talking about the book the day before the tragic events occurred, Mayadunne said: “She wanted to launch the book and present the first book to my sister and I. As I don’t live in Sri Lanka, she wanted to see when I could make it, so that she could start organising the launch. I told her to fix any date that was convenient for her and I told her that I will somehow make it for the launch.”

Mayadunne is determined to get the book out to the general public and bring to fruition her mother’s years-long plan. “The work my mom did on this book should not go to waste,” she said, adding that her mother wanted to change the perception Sri Lankan people have towards cooking at home – especially with our busy lifestyles – with this book, just as she did with her previous publications.

Shantha Mayadunne always believed in the power of home-cooked meals, and how eating together played a big part in building a happy family. “My mom was not a chef working at a hotel, she was a culinary specialist who was known for ideating quick and easy cooking methods with easily accessible ingredients, to simplify the lives of Sri Lankan people. Her mind was always focused on the plate of food in a Sri Lankan home.”

Candidly sharing that her mother felt that even Tharanga and her sister had too busy a lifestyle to actually find time to cook, Mayadunne went on to explain that her mother saw how cooking the usual rice and curries was becoming a time-consuming task in the lives of everyday Sri Lankans, invariably leading them to get food delivered or buy food from restaurants. 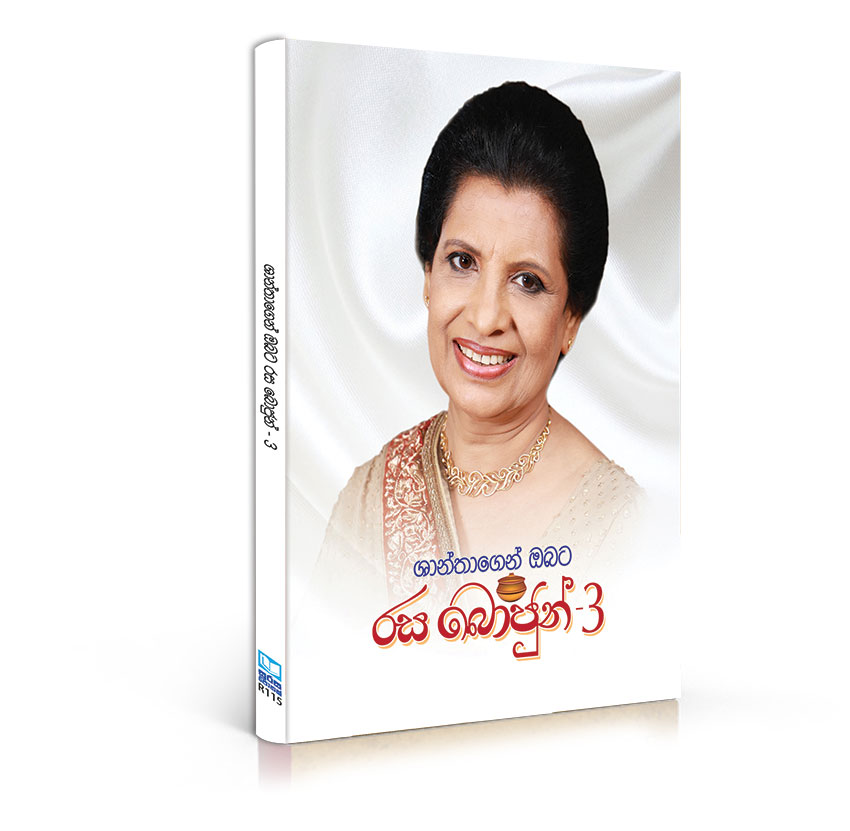 “All her recipes in this book can be made using day-to-day ingredients and spices and none of the recipes include any artificial flavouring,” explained Mayadunne, adding that the measurements and steps in the recipes are meticulously illustrated so that even novice cooks can follow the instructions without difficulty. “She has even gone to the extent of stating ingredients like cinnamon in the measurement of inches. The only ingredient without a measurement in this book is salt and that can be added according to the taste of the individual.

“Upon my mother’s passing, I went through the book and even tried out a few of the recipes. I found it extremely useful because it contains a lot of new ideas that most people would not think of,” said Mayadunne, moving on to invite readers of the book to post pictures of the dishes they make along with their comments tagging her mother’s Facebook page @shanthamayadunne. “This would help me build a tribute page for her as this was her final creation.”

Her mother, she shared, was a lady full of character and simplicity, who upheld family values and always stayed true to her roots, valuing tradition no matter what she achieved in life. “She lived a life that she can be proud of and I am so proud to have been born as her daughter. I just hope and pray she will be my mom in Sansara.”

Mayadunne is said to have been the first culinary demonstrator to host a live television cookery programme in Sri Lanka. She published her first cookery book “Rasa Bojun” in 2001 and her second in 2005. She was a brand ambassador for various food products in Sri Lanka and has won numerous awards including state awards and popularity awards for her contribution towards the field of culinary art.

ශාන්තාගෙන් ඔබට රස බොජුන් 3 was launched at the Olympic House Auditorium in Colombo 7 and will be available at all leading bookstores.

June 7, 2020 byJennifer Anandanayagam No Comments
A tooth enamel protein has been discovered in eyes with dry age-related macular degeneration. This finding may lead to a novel therapeutic target for blinding disease.

Ranjit Seneviratne and the forest in his yard

May 3, 2020 byBernadine Rodrigo No Comments
The life of an experienced man living a self-sufficient life.