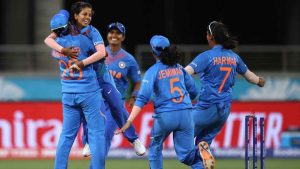 A bewitching spell of wrist spin from Poonam Yadav sank Australia on the opening night of the T20 World Cup at the Sydney Showgrounds, underlining India’s status as a genuine contender for a tournament that has heaped untold pressure onto the world No. 1-ranked hosts.

In front of a crowd of 13,432 – the best-ever for a standalone women’s cricket match in Australia – the Indians began with familiar bombast at the top of the order before the loss of three wickets for six lowered their expectations. Deepti Sharma was not daunted, reverting to a plan B of running as many singles as possible and guiding India to a competitive 132.

While Alyssa Healy made a much-needed return to runs and confidence at the top of the Australian order, the rest struggled for timing on a slow, dry surface that proved to be ideally suited to Yadav’s art. A legbreak and three wrong’uns delivered her the wondrous figures of 4 for 19, and with the strong support of Shikha Pandey, Australia were confounded. Having entered 2020 as the world’s undisputed T20 dominators, the hosts have now lost three games out of six and are no guarantee to make the semi-finals.

September 12, 2018 byRevatha No Comments
Despite a 4-1 defeat in the Test series, the Indian skipper says his side have not been outplayed by England.

September 13, 2018 byRevatha No Comments
The opening batsman has sustained a lower-back injury in UAE