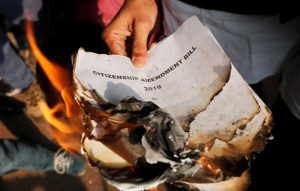 India’s parliament has approved a bill that grants citizenship to non-Muslim illegal immigrants from Afghanistan, Bangladesh and Pakistan.

The bill passed the upper house of parliament by 125 votes to 105. It had already cleared the lower house.

The news came as protests against the bill raged in north-eastern states bordering Bangladesh. Troops were deployed in Tripura and police battled protesters in Assam’s capital Guwahati.

Critics say the bill is discriminatory.

But the ruling Hindu nationalist Bharatiya Janata Party (BJP) says it will give sanctuary to people fleeing religious persecution.

The Citizenship Amendment Bill (CAB) is now set to be signed into law. BBC

September 10, 2018 byMalik No Comments
A man has been charged with murdering his wife, three young children and their grandmother at a house in Western Australia (WA).

More than 40 die after Indian bus plunges into gorge

June 21, 2019 byRandev No Comments
At least 44 people have been killed in India after a bus plunged into a gorge, officials say.