India to announce their head coach 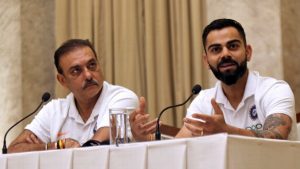 Ravi Shastri and Virat Kohli address a press conference ahead of India’s departure to the West Indies. Kohli made a clear and public announcement that he would prefer if Shastri was to continue as head coach

India are gearing up to announce their next head coach. The BCCI is conducting meetings with six candidates, including the incumbent Ravi Shastri, and is expecting to make a final call on Friday evening.

Three of the candidates were scheduled to make their presentations to the Cricket Advisory Committee led by Kapil Dev in person: Mike Hesson, the former New Zealand coach who took the team to the 2015 final, Robin Singh, part of four-time IPL champions Mumbai Indians and Lalchand Rajput, manager when India won the inaugural World T20 in 2007.

Shastri, who has been coaching India since the end of the 2017 Champions Trophy, Tom Moody, formerly with Sri Lanka and Sunrisers Hyderabad and Phil Simmons, who helped West Indies win the World T20 in 2016, would be joining in via teleconference.

The contracts of Shastri and his support staff were meant to expire at the end of the 2019 World Cup but they were given a 45-day extension keeping in mind the West Indies tour. Ahead of his departure, India captain Virat Kohli made a clear and public announcement that he would prefer if Shastri was to continue as head coach.

February 11, 2019 byRevatha No Comments
Mohan - Thilanga - Ravin - Shammi faction to go to courts over banning of them by Sports Minister