By Ishani Upatharitha in Galle

Sri Lanka Women display a much improved performance yet they fail to reach the high standards of their Indian counterparts in Galle on Thursday. 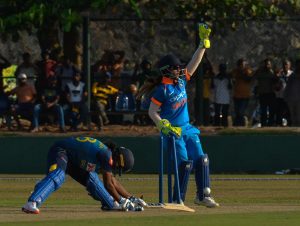 Taniya Bhatia, the wicketkeeper-batswoman of India, playing in her second ODI, scored a 66-ball 68 and then took two vital catches and pulled off a fine stumping too. (Pix courtesy SLC)

The Indian Women’s cricket team defeated Sri Lanka Women by seven runs in the second match of their three-match ODI series and thus recorded an unassailable 2-0 lead at the Galle International Cricket Stadium on Thursday, 13 September.

Sri Lanka on many occasions looked like pulling off the win of the match to keep the series alive. Yet on all occasions India’s Taniya Bhatia made all their efforts in disarray.

Bhatia, the wicketkeeper-batswoman who was playing only her second ODI, made a 66-ball 68, her maiden international half-century, and then took two vital catches and pulled off a fine stumping during the latter stages of the Sri Lankan chase.

Chamari Atapatthu took three wickets for 42 runs while Sripali Weerakkody and Udeshika Prabodhani took two wickets each for the Lankans. 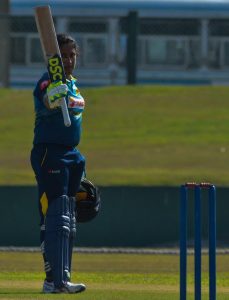 Sri Lanka Women were bowled out for 212 runs in 48.1 overs. Skipper Atapattu scored 57 runs in 95 balls with eight boundaries and a six. Shashikala Siriwardene scored 49 in 91 balls with six boundaries. Atapattu and Siriwardene made vital 89 runs for the fourth wicket.

Nilakshi de Silva struck a quick-fire 31 in just 19 balls inclusive of two boundaries and two sixes. De Silva and Prabodhani made 40 runs for the eighth wicket.

Sripali Weerakkody (17), Anushka Sanjeewani (17) and Prasadani Weerakkody (11) too contributed with some runs to the Sri Lankan total yet none of them could carry them past the finish-line.

Mansi Joshi took three for 51 and Rajeshwari Gayakward took two wickets for 37 for India. Significantly, there were three run-outs in the Sri Lanka Women’s innings.

The third and final ODI of the series will be played on Sunday, 16 September at MCG grounds, Katunayake before the start of their five-match T20 International series.

This is one of the ongoing ICC Women’s Championship matches involving the eight leading Test playing countries of the world.

Presently India is placed fifth in the list which is led by New Zealand Women.

Sri Lanka Women are in the eighth and last spot sans any win, out of eight matches.

Last Tuesday, 11 September Sri Lanka suffered a nine-wicket loss in the opening ODI of the series at the same venue.

Remainder of the series:

February 6, 2020 byTSM Web Desk No Comments
Olympic organisers are "seriously concerned" about the spread of coronavirus and the impact it could have on the Tokyo Games this summer.