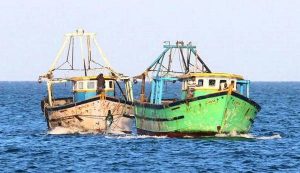 Several Indian fishermen and their fishing trawlers were detained by the Sri Lanka Navy for poaching in Sri Lankan waters.

The Sri Lanka Navy had arrested four Indian fishermen during a patrol conducted in just off the coast of the Kovilam Lighthouse.

The fishermen were handed over to the Assistant Director of Fisheries in Jaffna for onward action, after a medical examination.

The Navy media unit said that as a result of continuous patrols conducted by the Sri Lanka Navy, the number of Indian fishing trawlers entering Sri Lankan waters has significantly reduced.

The Navy said it will continue to utilize its resources effectively for the protection of local fishermen as well as the preservation of fish stocks in Sri Lanka’s territorial waters.