December 2, 2020 by Skandha Gunasekara No Comments

The Sri Lankan Government has called on the Indian Government to monitor and prevent Indian fishermen encroaching in Lankan waters. 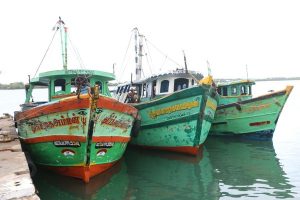 State Minister of Ornamental Fish, Freshwater Fish and Shrimp Farming Development, Multiday Fishing and Fish Export Kanchana Wijesekera said that requests had been made to the Indian Government at the highest level.  “Prime Minister Mahinda Rajapaksa discussed the matter with Indian Prime Minister Narendra Modi during their virtual summit three months ago.”
He said that Minister of Fisheries Douglas Devananda had made a more recent call as well.
“Minister Devananda spoke with his Indian counterpart and made a request to ensure Indian fishermen don’t cross over to Lankan waters.”
He said that Indian fishermen were taking advantage of the Covid-19 situation in Sri Lanka to poach in Lankan waters.
“We cannot detain the Indian fishermen once arrested because of the high Covid-19 cases among them. Therefore, we have to release them once arrested.”

December 29, 2020 byNethmi Liyanapathirana No Comments
The United National Party (UNP) has stated that the Government should expedite the process to make a final decision on the final rites of the Covid-19 dead.

January 8, 2021 byLahiru Pothmulla No Comments
A total of 422 workers at vegetable and fish stalls have been subjected to PCR tests since December 29 and three of them have tested positive for COVID-19, Police Spokesman DIG Ajith Rohana said.