India’s Muslims fear for their future under Narendra Modi 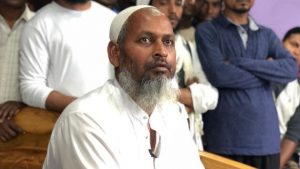 With an increase in hate crimes against Muslims in India in recent years, some fear the world’s largest democracy is becoming dangerously intolerant under the Hindu nationalist Bharatiya Janata Party (BJP). The BBC’s Rajini Vaidyanathan reports.

It happened just days before the first phase of voting in the Indian elections.

A Muslim trader in the north-eastern state of Assam was leaving work when he was accosted by a mob.

Shaukat Ali was surrounded by the group, forced to kneel in sludge as he was attacked.

“Are you Bangladeshi?” one man shouted, questioning his Indian citizenship.

“Why did you sell beef here?” asked another as he jabbed his finger at Ali.

Instead of stepping in to help, the crowds that gathered, filmed the incident on their mobile phones.

‘An attack on my entire faith’

A month later and Ali is still struggling to walk. I met him at his home, a short drive from the market, surrounded by lush verdant countryside and rice fields.

As the 48-year-old sat cross-legged on his bed, his eyes filled with tears as he recounted the horror of what happened.

“They beat me with a stick, they kicked me in the face,” he said, showing me the injuries to his rib cage and his head.

For decades his family have served beef curry from their small food stall – but never before had they faced such trouble. Some states have made it illegal to sell beef because Hindus consider the cow sacred – but it is legal to sell it in Assam.

Shaukat Ali wasn’t just injured physically – he was stripped of his dignity. The mob made the devout Muslim to eat pork, forcing him to chew it and then gulp it down.

“I have no reason to live now, ” he said as he broke down, “This was an attack on my entire faith.”

On the day we met, dozens of members of the local Muslim community had gathered at his house to check on Ali. As they listened to his story, some started to cry as they wondered if they were now vulnerable too.

As the world’s largest democracy goes to the polls, questions are being raised about how inclusive India is to its large Muslim minority population of 172 million.

Shaukat Ali is the latest victim of an increasing number of attacks perpetrated on those selling, or suspected of selling beef.

A February 2019 report from Human Rights Watch found that between May 2015 and December 2018, at least 44 people – 36 of them Muslims – were killed across 12 Indian states. Around 280 people were injured in more than 100 incidents across 20 states over the same period.

In her annual report, United Nations Human Rights chief Michelle Bachelet raised concerns over “increasing harassment and targeting of minorities – in particular, Muslims and people from historically disadvantaged and marginalised groups, such as Dalits (formerly known as untouchables).”

Religious violence claiming victims of all faiths has been an unwelcome mainstay of this country’s history since its inception.

But there’s real concern that those who wield power in today’s India are embracing a culture of impunity.

One of the most chilling examples was what happened in the aftermath of one of the most gruesome gang rapes in India in recent years.

In January last year, an eight-year-old Muslim girl was taking the family’s horses to graze, when she was kidnapped in Kathua district in Indian-administered Kashmir.

Held captive for a week in a Hindu temple, she was drugged and repeatedly gang raped and tortured before she was murdered.

A police report filed afterwards said the crime was part of a plan by a group of Hindu men to drive the nomadic Muslim Bakerwal community that she belonged to, away from the area.

More than a year on, a policeman stands guard outside her family home in a remote part of Kathua, hidden at the end of a long and bumpy dirt track.

“They said this is the daughter of a Muslim, kill her and they’ll get scared and run away,” her father told me as he wiped tears from his eyes.

Her parents refuse to give up the home their little girl once lived in, but they’re concerned about their safety.

“We’re scared to go out now as we fear for our lives,” her mother said. “If we step out, people swear at us and threaten to beat us.”

In the aftermath of the eight-year-old girl’s death, hundreds took to the streets and marched. But many of the local protests were in support of the eight Hindu men charged with the gruesome attack, and not in solidarity with the victim and her family.

Two BJP ministers serving in the state government, Chaudhary Lal Singh and Chander Prakash Ganga, were among those who took to the streets to support the alleged perpetrators.

“This one girl has died and there is so much of investigation. There have been many deaths of women here,” Singh reportedly told a rally at the time. (BBC)

January 9, 2019 byRandev No Comments
US President Donald Trump has demanded funding for his long-promised US-Mexico border wall to halt "a growing humanitarian and security crisis".

Top Iranian general killed by US in Iraq

January 3, 2020 byTSM Web Desk No Comments
General Qasem Soleimani, the head of the Iranian Revolutionary Guards' elite Quds Force, has been killed by US forces in Iraq.