The Central Environmental Authority (CEA) estimated that major industrial parks of Sri Lanka generate approximately 30 million cubic metres of wastewater per year. Although the CEA has set out standards for effluent discharge, the authority indicated that about 10% of the wastewater that is produced from industries gets discharged to the environment without being treated.

This causes a serious threat to the environment as the wastewater gets released to a drain, canal, or lagoon, which then takes it to a river, and eventually falls into the ocean.

In 2017, the CEA had identified 150 sources of pollution caused by industries that were linked to tanning, oil refining, beverages, textiles and clothing, rubber, ceramics, food production, fertilisers, and plastics.

The Sunday Morning this week visited one such site where untreated wastewater was just released to a nearby drain, most often late at night, which goes unnoticed by the residents of the area.

Upon reaching the area in question located in Wattala, down A.S.P. Liyanage Mawatha, we observed that the main canal was carrying a polluted body of water towards the Kelani River.

Right opposite the main canal, a leading international school is situated and at the time we arrived in the area, a long line of school vans were parked right next to the canal, which would possibly be making the students, parents, teachers, and school van drivers sick and uneasy from the pollutant air emanating from it.

To the main canal, wastewater is brought through drains that originate from by-lanes. We traced one of the by-lanes down Governors Park, 1st lane to locate the origins of the wastewater.

Although the water pollution is alleged to be caused by the pollutants released from certain factories, we also observed that garbage had been tossed to the sides of the canal, and as we took a turn towards the by-lane, we observed more garbage floating in the drain, which was adding to the damage.

The residents down the lane were, of course, shielded from the eyesore that is taking place, as all the houses were protected by giant parapet walls and massive gates. The water in the drain was a sludgy black, and as we reached the end of the lane, the pipelines that were releasing the pollutants to the drain became quite visible.

When we checked our location on an online mapping service, they indicated that we were in the backyard of a fabric product manufacturer in the area. There was no wastewater getting disposed to the drain at that moment. However, we noticed that at the place where the pipeline would discharge wastewater, there were clear indications of traces of green and black dyes that had colourised the drain sides. 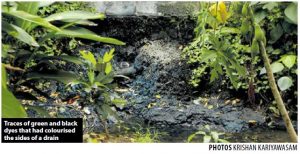 The pipeline was capped off and just a few metres away there was a stream of frothing water being gently discharged to the drain.

As there was no sign of people down the lane, we drove out towards the main canal, where we located a grocery shop that was set up at the Hekitta Road-A.S.P. Liyanage Mawatha intersection. We spoke to Lakshman, the grocery shop owner, to ask whether there were other factories in that area which dispose untreated wastewater to the canal.

“The apparel manufacturer that you are referring to has been functioning for over 40 years now and the wastewater issues too go back that far. This is just one factory, but this water body gathers pollutant wastewater from the Dutch Canal and the Hamilton Canal. There are quite a lot of factories that need to be held accountable for the pollution that has been caused over the years.”

The long-term neglect by the Wattala-Mabola Urban Council (UC) over the increasing pollutants in the canal too can be noted as one of the growing causes of environmental pollution, Lakshman stated.

“The garbage being dumped right into the canal too causes various issues; polythene blocks the pipes and then when there are heavy rains, the by-roads tend to get inundated, bringing out all the garbage and polluted water to the road. Moreover, when the weather is too sunny and the water levels drop in the canal, there is this unbearable stench that emanates from the mud,” Samantha Perera, a resident of Hekitta explained.

According to them, there are no creatures in the canal, but their worry is that the polluted water falls to the Kelani River and then makes it to the ocean through Mattakkuliya, just passing Crow Island, spreading the pollutants to anyone residing downstream.

The CEA also noted that Sri Lanka has constructed wastewater treatment plants at its major industrial parks in Biyagama, Seethawaka, Horana, and Greater Colombo that have the capacity of treating 7.5, 9, 11, and 2.5 million cubic metres of wastewater respectively, per year.

Moreover, an amount of $ 95.1 million was sanctioned by the Swedish International Development Agency (SIDA) as an interest-free concessionary credit to the Government of Sri Lanka for the implementation of the Ratmalana/Moratuwa and Ja-Ela/Ekala Wastewater Disposal Project.

This was complemented with a grant funding of SEK (Swedish krona) 56.2 million for the engineer/supervision input, an output-based grant of $ 0.1 million, and funding from Global Partnership on output-based aid/World Bank for an amount of $ 3 million, of which SIDA contributed with the counter value of SEK 14 million.

The project, which was implemented during 2008-2016, aimed at improving the environmental conditions in the two areas and mitigating pollution by providing a full-fledged wastewater system comprising sewerage, pumping, treatment, and safe disposal of treated effluent and sludge, which would enhance the living conditions of the people living in the areas as well as sustain industrial development.

No one takes responsibility

When contacted for comment over the possible water pollution that was taking place at the site where the apparel manufacturer was draining out its untreated effluent water, the Wattala-Mabola Urban Council said that the area did not fall under their purview, and the writer was directed to get in touch with the Medical Officer of Health (MOH) Office in Wattala.

The Sunday Morning then contacted the Wattala MOH for comment, and was told that there is always the dispute of whether the drains, waterways, and canals are under the purview of the urban council, MOH, or the CEA.

“The MOH office handles the technical aspect of these issues and we are able to take in complaints made by area residents. Ideally, the institution that you are referring to functions under the Board of Investment (BOI) and should obtain the necessary certification and have a water treatment plant within its factory premises to treat effluent water before it is released to the environment,” an official of the Wattala MOH explained on the condition of anonymity.

He further noted that even if water pollution is reported, the MOH will have to alert the relevant state institution to look into the matter and take legal action against the entities.

“Without a formal complaint by a resident, we are unable to probe into the matter or advise the relevant authorities to take action against not one company, but all companies that are releasing untreated effluent water to a canal, which falls to the river and to the ocean. Moreover, the impact from the pollutants is not experienced by a larger population, which can be a reason as to why this matter is overlooked by authorities,” he elaborated.

He added that the garbage dumping issue should definitely be looked into by the Wattala-Mabola UC as it is their responsibility to ensure that garbage is routinely collected from residential and industrial areas of Wattala.

The official from the MOH office stated that there should be clear assignment of the inland water bodies, canals, and waterways so that when people have to raise issues of this nature, one institution could easily take legal action against those who pollute.

December 30, 2019 byEaswaran No Comments
The future of technology in Sri Lanka is 5G. While successive governments have considered expediting the process to have 5G technologies around the country, the process never really got moving.